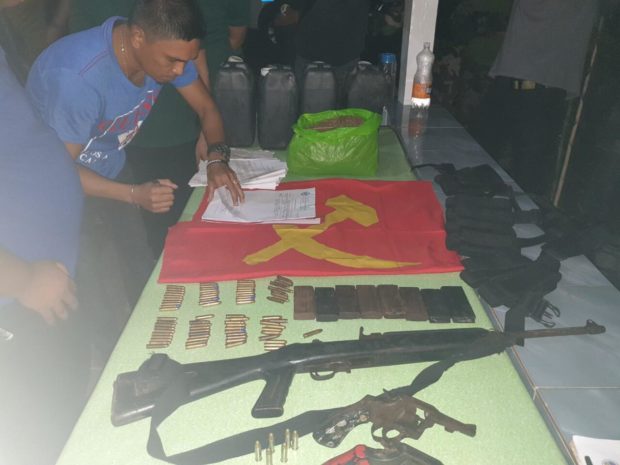 A police officer inspects a plastic bag of dried marijuana leaves, firearms, ammunition and other items left behind by fleeing New Peoples Army rebels after an encounter with government troops in Kiamba, Sarangani on Sunday, March 17, 2019. (Photo from Police Regional Office 12)

MANILA, Philippines – A marijuana plantation allegedly maintained by the New People’s Army (NPA) was discovered by the police, military and anti-drug operatives in Sarangani province, the Soccsksargen  Police Regional Office said in a report on Monday.

Soccsksargen regional police director Chief Supt. Eliseo Rasco said that elements from the Philippine National Police (PNP), Armed Forces of the Philippines (AFP) and the Philippine Drug Enforcement Agency (PDEA) discovered the plantation while in pursuit of fleeing NPA rebels after a skirmish Sunday morning in Sitio Tabutong, Barangay Nalus in the municipality of Kiamba.

Rasco said government troops launched a follow-up operation against the fleeing NPA members at around 3:30 p.m. and  discovered the nearby marijuana plantation.

The marijuana plants, however, were already uprooted when authorities got to the plantation.

Recovered from the fleeing rebels were a carbine rifle, two .38 caliber pistols, a bandolier, various ammunition, containers of rice and kitchen utensils,  documents and an NPA flag. / gsg