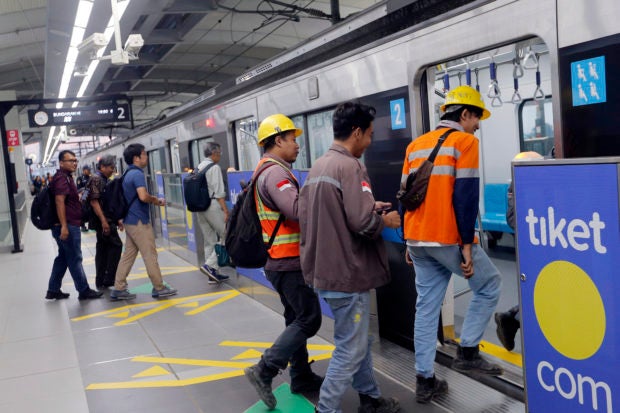 In this March 15, 2019, photo, passengers get on a Mass Rapid Transit (MRT) during a trial run in Jakarta, Indonesia. Commuting in the gridlocked Indonesian capital will for some involve less frustration, sweat and fumes when its first subway line opens later this month. The 10-mile system running south from Jakarta’s downtown is the first phase of a development that if fully realized will plant a cross-shaped network of stations in the teeming city of 30 million people.(AP Photo/Tatan Syuflana)

JAKARTA, Indonesia – Commuting in Indonesia’s gridlocked capital will for some involve less frustration, sweat and fumes when its first subway line opens later this month.

The line is the latest of infrastructure improvements nationwide that officials hope will help the giant but laggard nation catch up with its neighbors.

The 16-kilometer system running south from Jakarta’s downtown is the first phase of a development that if fully realized will plant a cross-shaped network of stations on the teeming city of 30 million people.

A $2.4 billion elevated rail network linking Jakarta and its satellite cities is also taking shape, with the first stage expected to begin operating in April.

Congestion has relentlessly worsened in the past decade as car ownership rose, squeezing more and more vehicles onto Jakarta’s unchanging road network.

Average peak hour speed has “significantly decreased” to 10 kilometers an hour, according to the transport ministry. It often can take two or more hours to move 5 kilometers in pockets of the city.

Annual losses from congestion are forecast to reach $6.5 billion by next year. Without better public transport an even greater’ carmageddon’ is facing Jakarta as rising incomes transform the owners of its 18 million motorbikes into car owners.

But it likely will take several years for mass rapid transit to make a dent in the congestion. About 1.4 million people commute into central Jakarta on work days. The initial subway line aims to carry only about 130,000 people a day by the end of this year.

“We need more lines, continuing to the north, we need the east-west line, we need the loop line. By that time we can be talking about a significant impact of this metro to the traffic congestion of Jakarta,” MRT Jakarta president William Sabandar said in an interview.

“But this is great momentum already. What I’m expecting now is that this can be the momentum to promote the use of public transport in Jakarta,” he said.

He said the subway to the north of the city should start operating in 2024 and the east to west line could be ready by 2026 if work begins next year as planned.

The city’s middle classes look with envy at the clean efficiency of cities like Kuala Lumpur in Malaysia and Singapore or the rapidly expanding commuter rail network in Bangkok and are keen to see progress on transport.

“It’s very comfortable and I think I’ll always use it,” said oil company employee Anthon Pasaribu after joining the thousands of Jakartans who’ve taken the subway on trial runs.

Jakarta also faces far more fundamental problems that are only slowly being addressed.

Prone to flooding and rapidly sinking due to uncontrolled ground water extraction, Jakarta is the archetypical Asian mega-city groaning under the weight of its dysfunction. Middle class office workers live in upmarket oasis neighborhoods that strive to become Jakarta’s center but ultimately add to its problems.

Behind the modern facade of gleaming office towers that line the major thoroughfare, revamped for last year’s Asian Games, are tightly packed neighborhoods that lack sewage or waste water treatment. Only 4 percent of Jakarta’s waste water is treated, according to the government, causing massive pollution to rivers and contaminating the ground water that supplies that city.

Regina Synthia, who works at an international NGO, said she spends about a third of her income on taxis and buses. Since she lives near the last station in the new subway line, she hopes that will drop dramatically.

Getting to central Jakarta for meetings is a stressful and time-consuming endeavor. But her employer is moving its offices to a location near a downtown subway station. That will mean most of its workers can commute that way to work.

“With this MRT maybe it can change our paradigm,” she said. Going downtown for meetings, “we’re not afraid anymore.” / gsg