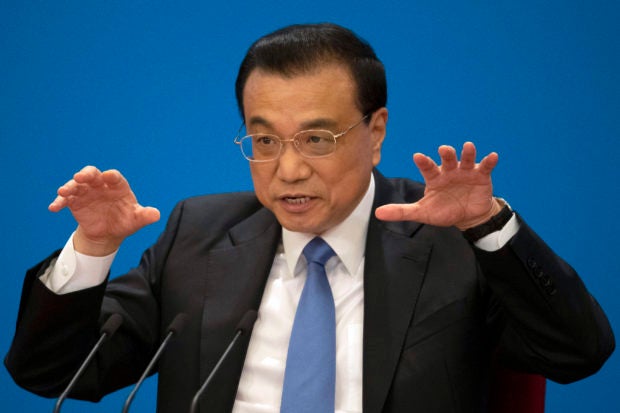 Chinese Premier Li Keqiang speaks during a press conference after the closing session of the National People’s Congress in Beijing’s Great Hall of the People on March 15, 2019.  AP

BEIJING — China’s No. 2 leader denied that Beijing tells its tech companies to spy abroad and promised Friday to treat foreign and domestic competitors equally in an effort to defuse tensions with Washington and Europe.

Premier Li Keqiang’s rejection of spying accusations at a news conference was the Communist government’s highest-level effort yet to put Western security concerns to rest. They threaten Chinese access to lucrative markets for telecom and other technology.

“This is not how China behaves. We did not do that and will not do that in the future,” the premier said when asked whether Beijing told Chinese companies to spy on foreign countries.

The United States, Australia and some other governments have imposed curbs on use of technology from Chinese vendors including Huawei Technologies Ltd. on security grounds. Washington is lobbying European and other allies to shun Huawei as their phone carriers prepare to invest billions of dollars in next-generation technology.

Huawei, the biggest global maker of network gear, has denied it facilitates Chinese spying. Its founder has told reporters he would reject official requests to disclose customer secrets.

President Xi Jinping’s government faces mounting pressure to repair trade relations with the United States, Europe and other major markets after last year’s economic growth fell to a three-decade low of 6.6 percent. Activity has weakened further on multiple fronts including cooling export growth and a contraction in auto sales.

Li promised to create a “level playing field” for all competitors in China’s state-dominated economy. He pledged to open more industries to foreign investment but gave no details.

“We will adhere to the principle of neutrality and treat domestic and foreign companies as equals,” he said.

Also Friday, the country’s ceremonial legislature endorsed a law aimed at defusing a tariff war with Washington by discouraging Chinese officials from pressuring companies to hand over technology.

The measure is part of an investment law that aims to address complaints that China’s system is rigged against foreign companies.

“This is designed to protect the rights and interests of foreign investors and attract more foreign investment,” Li said.
It was unclear whether the measure would mollify President Donald Trump, who raised U.S. duties on Chinese imports in response to complaints Beijing steals or pressures companies to give up technology.

Washington also wants China to roll back plans for government-led creation of global competitors in robotics and other technologies.

The new law is “vague enough that it allows for state-led industrial policy to continue behind the scenes,” Julian Evans-Pritchard of Capital Economics said in a report.

Both governments say negotiations are making progress but they have yet to announce formal agreements on ending the dispute that has disrupted trade in soybeans, medical equipment and billions of dollars’ worth of other goods.

Forecasters expect Chinese economic activity to pick up in the quarter that starts in April as government stimulus efforts through higher spending on public works construction gain traction.

That spending “will be enough to put a floor beneath economic growth by the second half of this year, but not enough to drive a strong rebound,” Evans-Pritchard said.

Government plans also call for higher spending on development of technologies including artificial intelligence, electric cars, biotechnology and new materials that China’s leaders see as a path to prosperity and global influence.

China’s emergence as a competitor in smartphones, solar power and other technologies has increased consumer choice and helped to drive down prices. But it rattles Washington and other governments that worry Chinese competition threatens their industries and employment.

Foreign business groups welcomed that but said they need to see how the law is enforced to know whether it improves conditions.

The European Union Chamber of Commerce in China expressed concern Friday the law would permit regulators to retaliate against companies from a country they believe discriminates against a Chinese enterprise.

That “allows for political issues to influence” regulatory decisions, a chamber statement said. It said the law’s “vague wording” adds to “legal uncertainty” for companies.

The American Chamber of Commerce in China expressed concern in a statement Wednesday about the broad scope of “national security reviews” allowed by the law that might block business activity.

The European chamber also expressed concern the focus on “administrative methods” might leave officials free to use other pressure tactics.

Chinese officials deny companies are required to hand over technology. But the companies face pressure including requirements in auto manufacturing, pharmaceuticals and other industries to work through state-owned partners. That requires them to share technology with companies the ruling Communist Party hopes will become their competitors. /ee