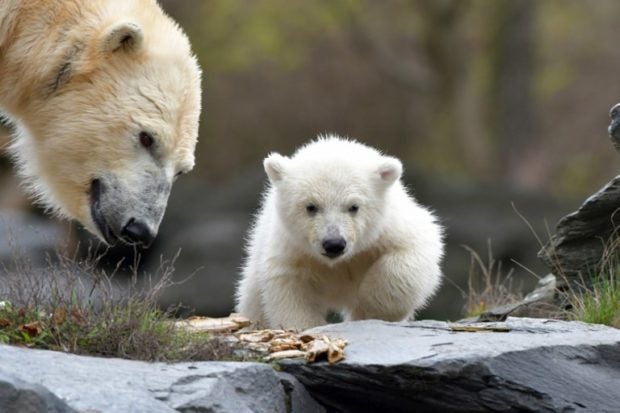 A polar bear walks past her mother Tonja at their enclosure as the baby is presented to the press after leaving the breeding burrow for the first time on March 15, 2019 at the Tierpark zoo in Berlin.  AFP

Nuzzling her mother Tonja, taking a dip in a pool in her enclosure and sniffing the fresh air, the still unnamed three and a half month old seemed oblivious to the phalanx of cameras gathered for her coming-out at the Tierpark zoo in the east of the capital.

Under grey skies, the cub splashed in the water, lolled on the grey stones outside the breeding burrow where she has lived since her birth on December 1 and gnawed on tree bark as she explored her new surroundings.

Following her media photo-op, she will be presented to the public on Saturday.

The mortality of polar bears tends to be very high in the first weeks. Tonja lost three of her cubs in less than two years.

To the great relief of her keepers, the new female has made it through the crucial first three months when a captive cub’s chances of survival hang in the balance.

Tierpark is hoping she will take the place in Germans’ hearts once occupied by Knut, the universally adored polar bear born in 2006 and hand-reared by west Berlin zookeepers after being rejected by his mother.

Knut’s worldwide fame led to appearances on the cover of Vanity Fair magazine and on German postage stamps and brought in millions of euros from visits and merchandizing.

But the cuddly icon died suddenly of a suspected brain tumor in 2011 at the age of four, sparking grief amongst his army of fans.

A bronze statue of Knut now stands in the west Berlin Zoo.

Its Arctic habitat threatened by global warming, the polar bear is listed as a vulnerable species by the International Union for Conservation of Nature (IUCN).

A European Union breeding plan is attempting to boost numbers of the bear, whose population in the wild stands at around 26,000, according to the IUCN. /ee