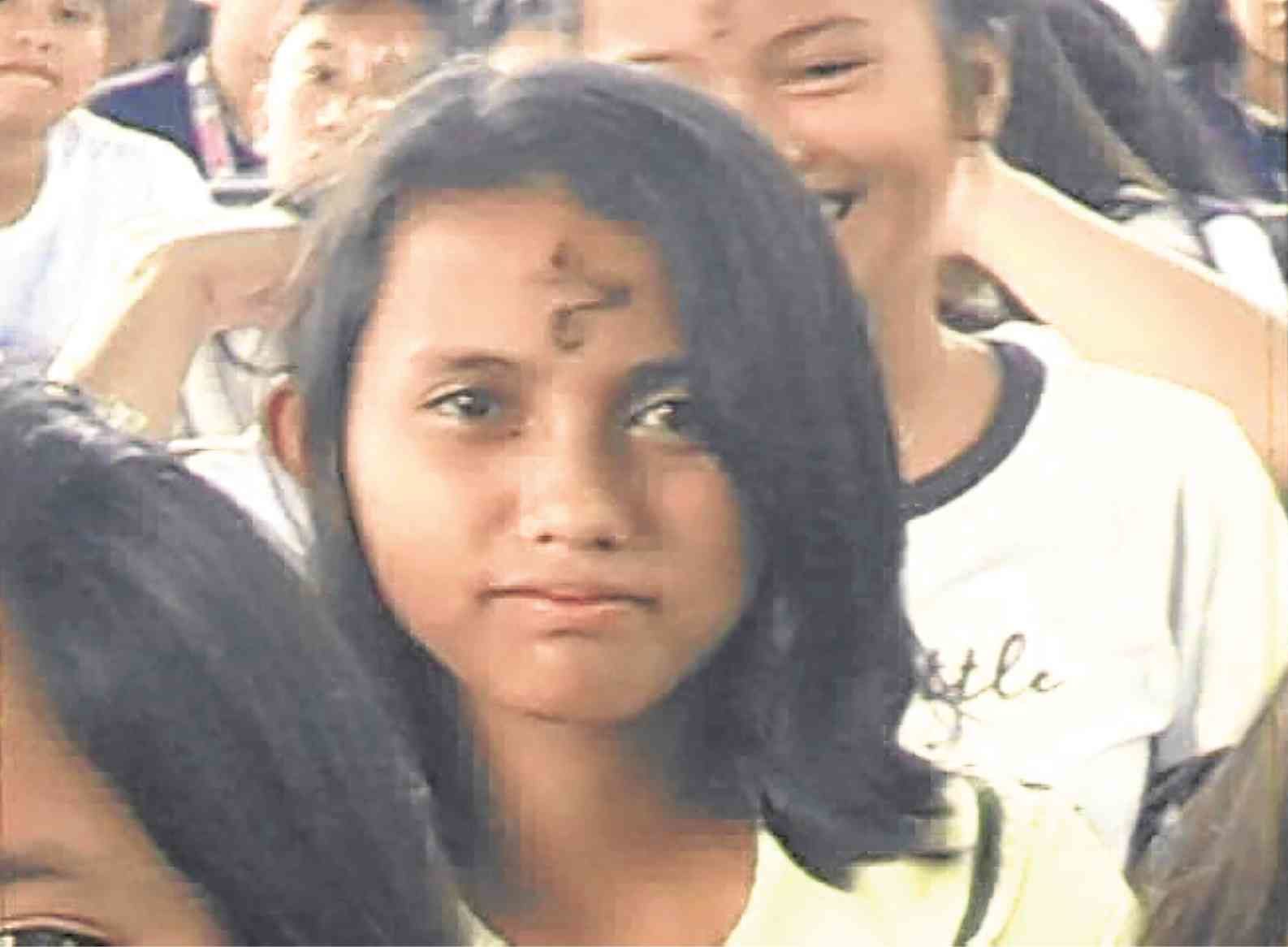 NOT CULTISTS President Duterte says he does not believe a cult is behind the murder of 16-year-old Christine Silawan, shown in this photo taken on Ash Wednesday in Lapu-Lapu City. —CONTRIBUTED PHOTO

President Duterte has ordered the Philippine National Police to solve the gruesome murder of a 16-year-old girl in Lapu-Lapu City, Cebu province, on Sunday, dismissing the police angle that the teenager was killed by a cult.

Duterte did not name the girl in a stump speech in Isabela province on Wednesday night, but he was clearly referring to Christine Silawan, a Grade 9 student at Maribago National High School in Lapu-Lapu City.

“[On Sunday] they killed [a girl]. They skinned her face,” Duterte said. “Her face was gone. Only the skull was left.”

Silawan was last seen alive on Sunday when she left home to hear Mass at Sacred Heart of Jesus Parish Church in Barangay Mactan.

Her mutilated body was found the next day, dumped on a vacant lot at Barangay Bangkal.

Part of her face had been flayed, exposing the skull.

The autopsy showed she had been stabbed 30 times in the neck and body.

Her tongue, trachea, esophagus and parts of her neck and her right ear were missing.

“The killers [of] the girl, the police said it’s a cult,” Mr. Duterte said.

“Hunt them, [the killers] of the girl who was skinned,” he said he told the police, indicating he did not believe in the cult angle.

Presidential spokesperson Salvador Panelo said on Thursday that the President had ordered the police to hunt down the killers.

“We think that this was done by a drug addict,” Panelo told reporters.

Asked why he thought the killer was a drug addict, Panelo replied: “Is there anyone who would do that? Can you believe the face was skinned? My goodness.”

Asked how a drug addict could have acquired the surgical skill required to make clean cuts and remove organs with precision, Panelo said it was possible if the drug addict was a surgeon or had training in surgery.

Cebu authorities are offering a P2-million reward for information that will lead to the identification and arrest of the killers.

Cebu Vice Gov. Agnes Magpale said on Thursday that the Provincial Council for the Welfare of Children would contribute P200,000 to the reward, while Lapu-Lapu City Mayor Paz Radaza promised to put up P1 million.

Presidential Assistant for the Visayas Michael Dino pledged P100,000 during a visit to Silawan’s home in Mactan on Thursday.

Lourdes Silawan, the victim’s mother, said she had asked the city government for financial help to bury her daughter.

Obon, however, refused to divulge the suspect’s identity so as not to jeopardize the investigation and manhunt for the killers.

The Cebu Provincial Police Office is looking into the possibility that the killers of Silawan are the same as those behind the  murder of 62-year-old farmer Trening Batucan in Danao City in January.

Batucan was also flayed from the head to the chest.

Jovy and Junrey have been killed in a police operation, while Jonas remains at large, Abrugena said.

He said investigators had received reports that the brothers were members of a cult.

“We do not have evidence yet [that] they are members of a cult. But we are considering that or they are just a group of people who were under the influence of drugs when the crime was committed,” Abrugena said. —WITH REPORTS FROM VILLAMOR VISAYA JR. AND NESTLE L. SEMILLA