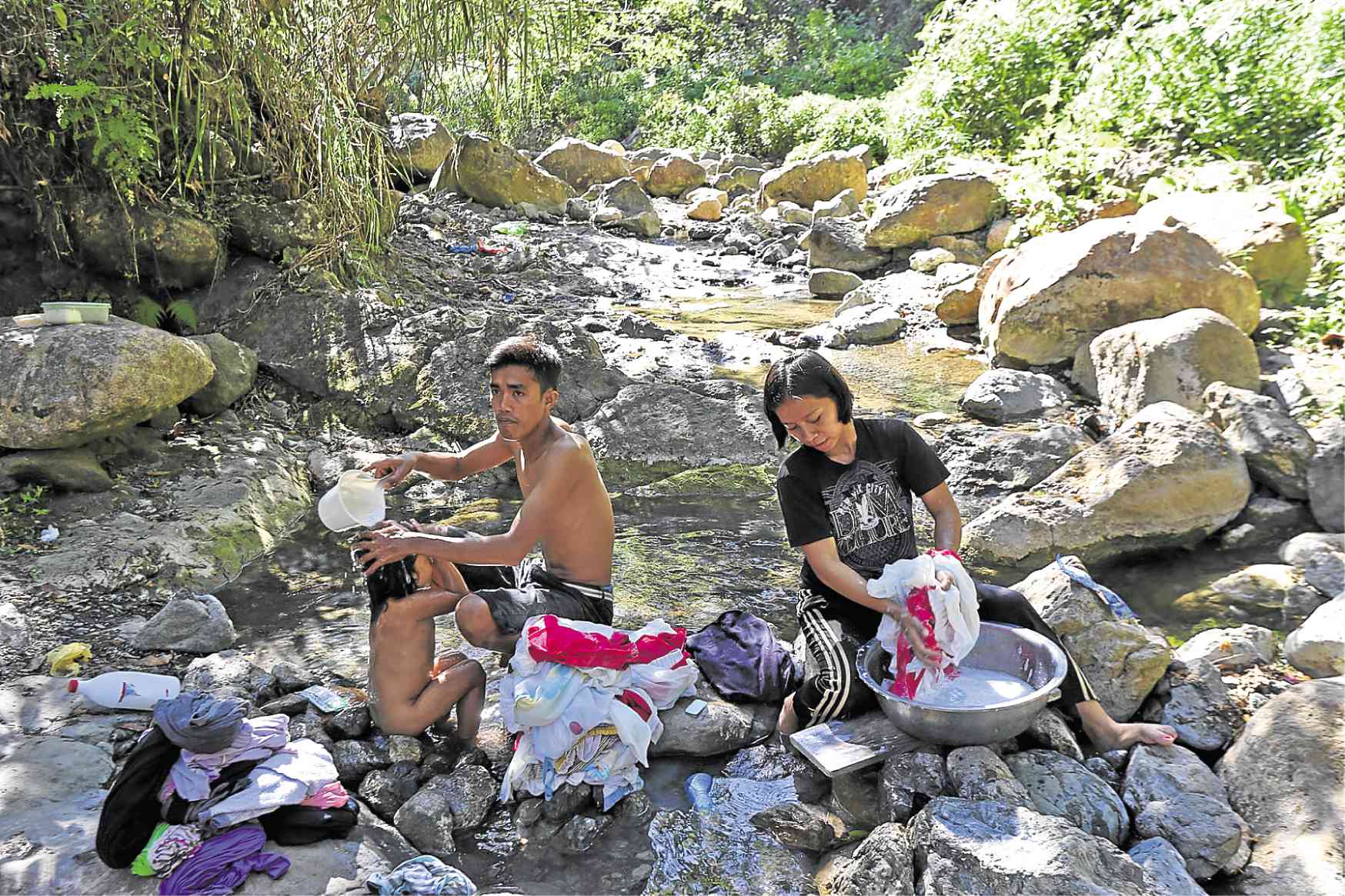 DRYING UP Alexander Tangaja, his partner Dayanalez Dacayana and their 3-year-old child Angel had to walk for 20 minutes from their house to draw water from the almost dry river of Sitio Paylan in Cebu’s City Barangay Bonbon. —JUNJIE MENDOZA

Metro Cebu, like large swaths of Metro Manila, is facing a water shortage even before the dry season has been officially declared.

Water rationing has been implemented in the cities of Cebu, Mandaue, Talisay and Lapu-Lapu and the towns of Consolacion, Liloan, Compostela and Cordova because of low supply.

The Senate may have to include Metro Cebu in its investigation of the water shortage in Metro Manila that has sent tempers rising and households reeling, as the problem continues with no apparent end in sight.

Sen. Grace Poe, who chairs the public services committee, is scheduled to hold a hearing on the issue on Tuesday next week.

Water production at Buhisan Dam had dropped from 5,000 cubic meters per day to 1,500 cu. m. per day as of March 13 due to the dry spell, said Charmaine Rodriguez-Kara, Metro Cebu Water District (MCWD) spokesperson.

Kara said the water district had no choice but to impose rotating supply interruptions in its service area.

The MCWD supplies water to 183,000 service connections in the cities of Cebu, Mandaue, Talisay and Lapu-Lapu and the towns of Consolacion, Liloan, Compostela and Cordova.

As of March 14, water interruption was experienced in elevated areas, mostly those that received water from Buhisan Dam.

Also affected by the service interruptions were downtown Cebu City and elevated areas in Talisay City, which get their water from Jaclupan Dam.

No water rationing was implemented by MCWD in Mandaue and other northern areas covered by MCWD, but residents had complained about low or no water supply at certain hours of the day.

Because the two dams are not producing water at full capacity, MCWD has to rely on groundwater, which accounts for 74,000 cu. m. of the 238,000 cu. m. of the water district’s total daily production, according to Kara.

City Agriculturist Apple Tribunalo said 70 percent of the water sources in the mountain barangays of Cebu City had been depleted.

Residents and farmers in upland villages have been forced to go down to the lowlands just to get water.

Poe said the sudden shortage in supply from Manila Water had baffled her. She wanted to get to the bottom of the problem and to know what could be done immediately to address it.

“Manila Water has a lot to explain about this crisis. Three weeks ago, they did not issue any advisory and we did not feel that there would be a shortage. Then all of a sudden, you would wake up and there’s no more water?” she said in a statement.

She noted that the water level at Angat Dam, which supplies more than 90 percent of Metro Manila, was normal.

Manila Water cited the dry spell and the dwindling supply at La Mesa Dam for the shortage.

In Malacañang, presidential spokesperson Salvador Panelo is not discounting the possibility that the water shortage in parts of Metro Manila is “artificial” and caused by inefficiency and mismanagement.

Panelo said this angle would be investigated as  the government looked into the service interruptions suffered by customers of Manila Water.  —WITH REPORTS FROM LEILA B. SALAVERRIA, JULIE M. AURELIO AND JEANNETTE I. ANDRADE