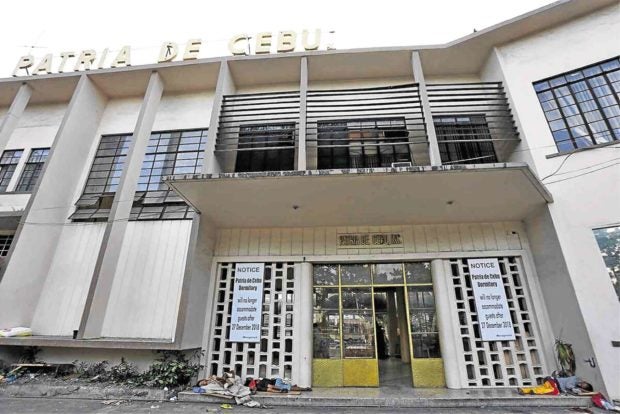 PIECE OF HISTORY The façade of Patria de Cebu, a youth recreational center built by the Catholic Church in Cebu City in the late 1950s, will be preserved as the property is transformed into a commercial center. —JUNJIE MENDOZA

CEBU CITY — In the late 1950s, a group of Catholic students in this city patiently piled each hollow block while reciting “Hail Mary” as they built a recreational center called Patria de Cebu.

More than 60 years later, the structure, built through prayers, is on the verge of demolition.

Officials of the Archdiocese of Cebu have agreed to lease the lot to a private firm to pay for the medical needs of priests.

“The structure is not something spectacular or beautiful. For the Church, we have varying degrees of heritage, but it has reached a point that it (Patria de Cebu) can be dangerous for the people. It is too old and dilapidated,” said Cebu Archbishop Jose Palma.

The archbishop earlier agreed to take down the entire Patria de Cebu, across the Cebu Metropolitan Cathedral in downtown Cebu City, and turn it into a commercial space with a public piazza, a hotel, a department store, a supermarket, restaurants and office spaces.

Heritage advocates, however, opposed the move and insisted that the old building must stay.

Among them were renowned architect, Melva Java, and former Cebu Daily News editor in chief, Eileen Mangubat, both of them members of the Archdiocesan Commission for the Cultural Heritage of the Church.

They sent Palma a letter on Nov. 27, saying there were “alternative designs that can preserve the building at the same time reap the maximum economic benefit of its location with modern, commercial structures.”

Palma recently announced that they would retain the facade of the edifice which would be integrated into the planned mixed-use commercial space.

“There are lots of requests to [preserve] the building, and so I made an announcement to retain a part of the Patria. In that sense, we will not destroy the whole structure,” he said.

Patria de Cebu was built in 1954 as a youth recreational center and served as a convent for nuns as well.

Today, the edifice serves as a budget-friendly hostel for travelers.

The Archdiocese of Cebu has partnered with the Cebu Landmasters Inc. (CLI) to transform Patria de Cebu into a mixed-use space.

CLI is investing around P900 million for the redevelopment of the 6,670-square-meter property of the archdiocese.

“Most churchgoers, when they finish attending Masses, will have this usual difficulty in having to go somewhere else. Whereas if you have an amenity just across where you can have your merienda, lunch, or dinner, that will be a big help,” said Jose Soberano III, CLI president and chief executive officer.

The developer entered into a 40-year lease agreement with the Archdiocese of Cebu for the project.

Palma said the board of Patria de Cebu decided to accept CLI’s proposal because they found it better and more “practical” than the other plans submitted.