No coal plants in surf town 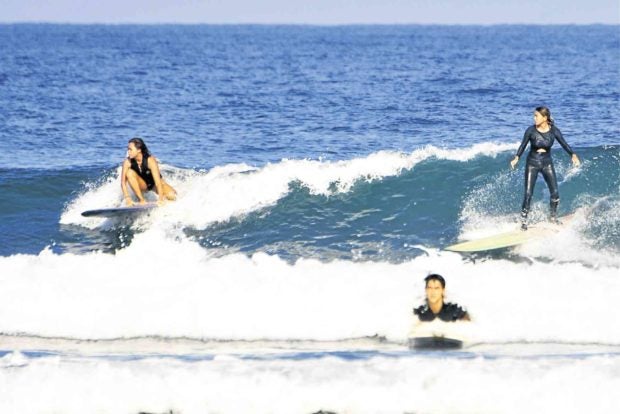 WAVE FUN Tourism is booming in San Juan, La Union, as surfers troop to the town to have some sun and fun. The local government says an ordinance banning coal-fired power plants in the area is meant to keep the waters in northern Luzon’s surfing capital clean. —WILLIE LOMIBAO

In a bid to preserve biodiversity and protect the health of residents, the municipal council on Monday banned the construction, development and operation of coal-fired power plants in the town.

In a resolution that was unanimously approved during Monday’s session, the council said coal-fired power plants had been scientifically proven to produce hazardous pollutants that destroy the environment and affect people’s health and livelihood.

It was authored by Councilor Miguel Corleone Magsaysay, chair of the council’s committee on tourism, culture, history, sisterhood and international relations.

“The approval of the resolution is a big contribution to our fight against the Luna coal-fired power plant,” Crisanto Palabay, president of the Koalisyon Isalbar ti Pintas ti La Union (Coalition to Save the Beauty of La Union), referring to the campaign by residents of nearby Luna town to ban polluting power plants.

“This is an inspiration not only for those who are in the movement but to councilors in other towns and cities to push for the use of renewable energy,” he said.

The resolution also called on other local governments in the province to adopt the same declaration “for the protection and conservation of the environment” and prevention of health hazards.

Since 2017, the coalition has been opposing the 670-megawatt power plant project proposed by Global Luzon Energy Development Corp., which will be built on a 41-hectare land straddling the coastal villages of Carisquis and Nalvo Sur in Luna.

In a manifesto read in all Masses, Presto said the temporary economic benefits from the operation of such plants were not acceptable trade-offs for long-term degradation of the environment.

The project site is just north of Balaoan town, which is known for its bountiful corn harvests and diverse coral gardens, and this town, the surfing capital of northern Luzon.

In January, members of the Manila Surfers Association (MSA) expressed their support for the residents’ opposition to the project. They staged a protest action before the start of this year’s 12th MSA Cup, which was participated in by 100 surfers.

In the resolution, the town council said San Juan’s beaches, marine sanctuaries, mountains and forests had attracted tourists and contributed to the town’s economic growth and livelihood.