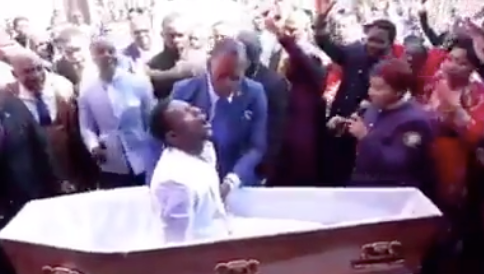 A South African church has come under fire after its pastor “resurrected” a “dead” man. The video of the supposed resurrection was shared all over social media and showed Alph Lukau, a pastor of Alleluia International Ministries in Kramerville, Sandton, standing over the “dead” man.

The “dead” man, named Elliot, was wearing a white suit and was lying inside a coffin with his mouth open. The video, shared on Twitter by a certain Chief Erican (@EricanSA) on Feb. 25, showed how the alleged resurrection happened.

In the video, Lukau told the people that Elliot had been dead since Friday, Feb. 22, and was in the mortuary. He then addressed the motionless Elliot and waved his hand in front of his face.

While Pastor Alph Lukau is busy talking, I encourage to concentrate on the mouth of the guy in the coffin then you will decide if he was dead or not.

Maybe this guy can bring back the like of Nelson Mandela, Hector Peterson, Hugh Masekela, Steve Biko, OR Tambo and others. pic.twitter.com/lFoNsM0grO

He then placed his hands over Elliot and appeared to be trying to bring him back to life. Elliot eventually sat up from the casket, his mouth open, amid loud cheers from the people.

The video has since earned criticism, with three separate funeral parlors breaking their silence for being duped into the church’s scheme.

Kings and Queens Real Funerals took to their official Facebook page on Feb. 26 where a joint press statement with funeral parlors Black Phoenix and Kingdom Blue was delivered by company lawyer Prince Mafu.

Mafu shared that the three funeral parlors “vehemently distance themselves” from the social media events that recently took place.

“The funeral parlors were used individually and separately through various forms of misrepresentations to suit a particular outcome which at the time was unknown to the funeral parlors,” Mafu said in the video.

A media briefing by Kings and Queens Funerals, Black Phoenix and Kingdom Blue on the the 'resurrection' at Alleluah Ministries.

The church apparently approached Kingdom Blue for the purpose of acquiring a coffin, while they used stickers of Black Phoenix to brand a private car. The car was then used to misrepresent it to Kings and Queens “for purposes of acquiring transport of the body to the rural areas…”

“It is with regret that the outcome of such a plot or scheme has obviously affected our reputation as service providers, our valued clients, and the general public,” Mafu said. “We wish to reiterate the message that we remain professional and legitimate in our operations…”

He also added that the events from the weekend have since been reported to the authorities for further investigation.

Meanwhile, the Alleluia International Ministries changed their tune following the backlash, as per The Sowetan Live on Feb. 26. In their narration, Elliot arrived at the church gate alive and kicking inside the coffin.

Church minister Busi Gaca and pastor Rochelle Kombou said the hearse driver ran off when he heard noises from the coffin.

“As soon as they got here they started hearing movement coming from the coffin,” Kombou said in the report. “And you know [in] our culture, if a person is dead and you start hearing movement people get scared.”

They also said that Elliot was already breathing when “man of God” Lukau came to him.

“It was not a resurrection miracle, we are saying the testimony was completed by the one who is chosen to do what he does,” she added. “These miracles of healing and deliverance were not an unusual sight at the church.” Cody Cepeda/JB

Floating pastor demonstrates how Jesus Christ would return to earth

Church raises $150,000 to pay off debts of college students