PNP: Floating blocks of cocaine bound for Australia not Philippines 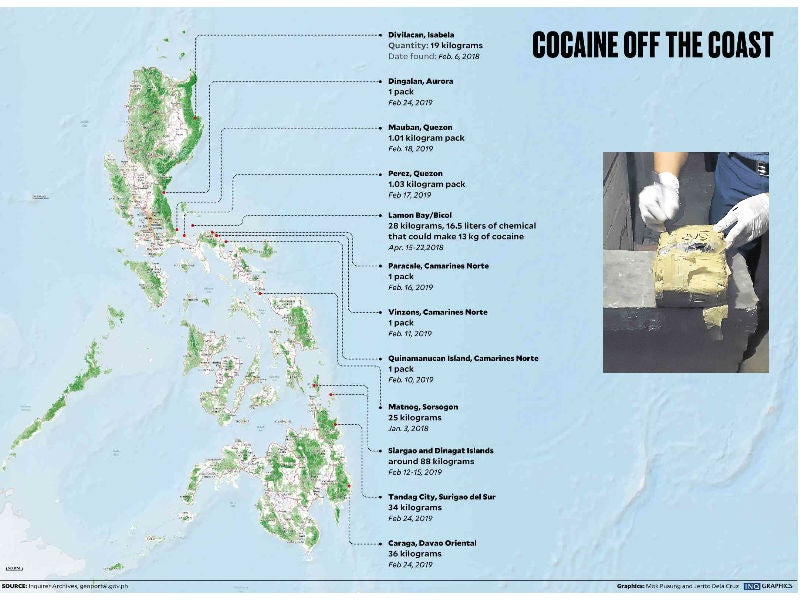 COCAINE OFF THE COAST At least 230 kilograms of cocaine with an estimated value of P1.32 billion have been recovered on the eastern shores and waters of the country from January last year to Feb. 24 this year.

MANILA, Philippines — The blocks of cocaine recently discovered in parts of the eastern seaboard of the country appear to be bound for Australia, Philippine National Police (PNP) chief Director General Oscar Albayalde revealed on Wednesday.

(I talked with our Australian counterpart earlier. Seemingly it appears that these more than 100 kilos of cocaine recovered from the eastern seaboard of our country came somewhere from the Pacific Ocean, but this is not for delivery to the Philippines.)

The PNP chief was with some officials of the Australian Federal Police as the two agencies and other counterparts launched the Philippine Internet Crimes Against Children Center in Camp Crame before he made the revelation.

(It is possibly meant to be delivered to Australia. That’s one, that’s a big possibility. Because according to the Australian police, the market value of cocaine there is good.)

According to Albayalde, drug syndicates may be using Papua New Guinea and the Solomon Islands as transshipment points for delivery of drugs to Australia, since they think they can go undetected by law enforcement in these small islands.

(Probably other blocks of cocaine were dumped because the ship was chased by the Papua New Guinea Navy. So allegedly, they dumped some of the blocks to make the ship lighter. But the ship was still intercepted.)

(So we think these were just swept by the current to our country. Most probably, either the ship had capsized or it was really dumped and they will just recover it later.)

Although the PNP has established another possible angle in the cocaine discoveries, the real source of the illegal drugs that were washed ashore remains a mystery as of this posting.

Albayalde said authorities will give a sample of the recovered cocaine to the Australian Police to help in the identification of its composition and possibly even identify the country where the drugs originated from.

Since all the blocks of cocaine were found only in the eastern seaboard and none in the western part of the country, Albayalde said these may have come from Peru, Colombia, Mexico, and other countries in the Pacific.