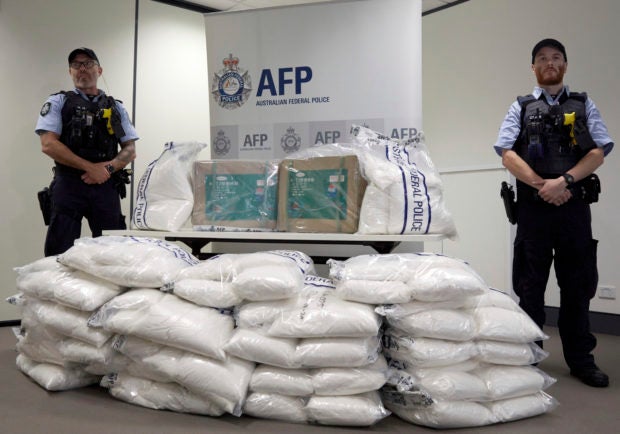 Police guard some of the 1.4 tons of seized ephedrine that is piled up during an Australian Federal Police press conference in Melbourne, Wednesday, Feb. 27, 2019. Australian authorities say they seized chemicals which could have been used to make one ton of methamphetamine and arrested four men in a joint operation with China. (Erik Anderson/AAP Image via AP)

MELBOURNE, Australia  – Australian authorities said Wednesday they’ve seized chemicals which could have been used to make 1 ton of methamphetamine and arrested four men in a joint operation with China.

Australian Federal Police said they seized 1.4 tons of the drug precursor ephedrine, which could have been used to make meth with a street value of nearly 700 million Australian dollars ($500 million).

Investigators said they were tipped off by Chinese authorities about a syndicate suspected of importing commercial quantities of drugs into Melbourne.

Border authorities intercepted a container arriving from China labelled as ceramic tiles and glue, but which police said contained 260 bags of ephedrine. Police said they switched the ephedrine with an inert substance and delivered the consignment.

Police arrested two Australian men, aged 53 and 55, as well as two Chinese nationals, both aged 26. All four were scheduled to appear Wednesday in a Melbourne court.

Police said they arrested the 53-year-old Tuesday at Melbourne International Airport as he tried to board a flight to China, while the older Australian was arrested near a local shopping center.

The two Chinese men were arrested at the address where the consignment was delivered, police said.

Australian Federal Police Assistant Commissioner Bruce Hill said organized crime groups that were once bringing in finished meth appeared to be reverting to importing the ingredients and then making meth in clandestine backyard labs.

He said that since 2015, Australian and Chinese authorities had jointly seized 24 tons of drugs and precursor chemicals.

“The strength of this partnership is clear in operations like this, which would not have been possible without the close cooperation,” Hill said in a statement.

If found guilty, the men each face maximum prison sentences of 25 years. / gsg