After Duterte rant vs inutile bets, his bets show off stage talents 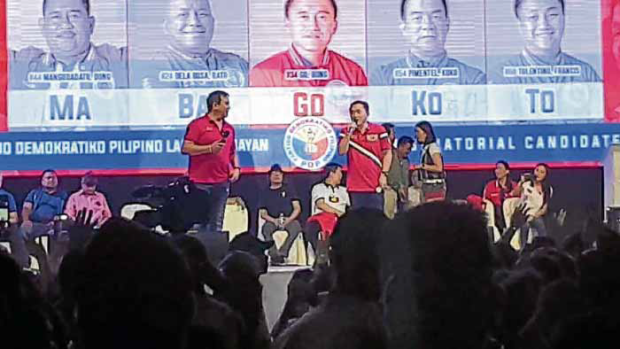 CEBU CITY — Just hours after President Rodrigo Duterte urged voters to reject what he said were inutile senatorial candidates of the opposition, his chosen ones took to the stage here to show the stuff they’re made of by singing and exchanging banter.

It wasn’t clear who the star of the show was.

The pitch for votes started with former Special Assistant to the President Bong Go getting into an impromptu comedy number with actor Phillip Salvador over a topic that seemed to get the crowd going — Salvador’s controversial past relationship with actress Kris Aquino, sister of former President Benigno Aquino III.

It was the first time for Go, the President’s most trusted aide, to formally address Cebuanos as a candidate, briefly telling the crowd of some 10,500 people about his legislative agenda.

He, however, spent most his time doing stand-up comedy with Salvador, mainly about Kris.

“He kept on going to Davao at least 20 times,” Go said of Salvador.

“He eventually had a girlfriend whom he had four children with,” Go added, drawing laughter.

“Wait a minute, I did not cheat on Kris. You know I loved Kris,” answered Salvador.

“You didn’t cheat on Kris? Kris and Mocha even got into a fight and I was dragged into the fray,” Go narrated, referring to Mocha Uson, former internet sex tutorial star and assistant communications secretary.

Mocha took this as a cue to come up the stage and shake Salvador’s hand. She is promoting the candidacy of her party-list group AA Kasosyo.

Go continued his skit with Salvador.

“If you did not cheat on Kris, you whistle,” Go said.

Salvador was unable to do so, prompting a follow-up joke from Go.

The veteran actor obliged by singing “Nandito Ako,” theme song from a movie he did with Aquino of the same title.

Pimentel, former Senate president, sang a ballad which he dedicated to his new wife, Kathryna.

Dela Rosa took his turn, singing “You Are the Reason.”

At a rally of his chosen candidates in Laguna on Saturday night, the President lashed out at opposition senatorial candidates for having done nothing.

“What have they done? Only talk,” the President said.

At the Cebu rally, the President’s chosen ones showed they could sing.