US steps up winter-warfare training as global threat shifts 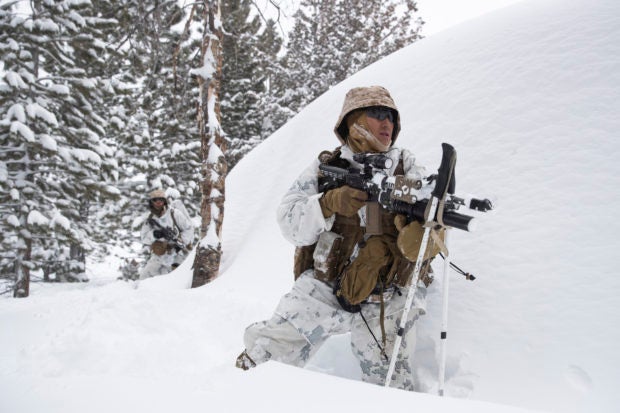 A U.S. Marine takes his position during advanced cold-weather training at the Marine Corps Mountain Warfare Training Center Sunday, Feb. 10, 2019, in Bridgeport, Calif. After 17 years of war against Taliban and al-Qaida-linked insurgents, the military is shifting its focus to better prepare for great-power competition with Russia and China, and against unpredictable foes such as North Korea and Iran. (AP Photo/Jae C. Hong)

MARINE MOUNTAIN WARFARE TRAINING CENTER, Calif.  — Hunkered down behind a wall of snow, two U.S. Marines melt slush to make drinking water after spending the night digging out a defensive position high in the Sierra Nevada. Their laminated targeting map is wedged into the ice just below the machine gun.

Nearly 8,000 feet up at a training center in the California mountains, the air is thin, the snow is chest high and the temperature is plunging. But other Marines just a few kilometers away are preparing to attack, and forces on both sides must be able to battle the enemy and the unforgiving environment.

The exercise is designed to train troops for the next war — one the U.S. believes will be against a more capable, high-tech enemy like Russia, North Korea or China. The weather conditions on the mountain mimic the kind of frigid fight that forces could face in one of those future hotspots.

“We haven’t had to deal with these things. We’ve been very focused on Iraq and Afghanistan,” said Maj. Gen. William F. Mullen, head of the Marines’ Training and Education Command. “What we really have to do is wake folks up, expose them to things that they haven’t had to think about for quite a while.”

After 17 years of war against Taliban and al-Qaida-linked insurgents, the military is shifting its focus to better prepare for great-power competition with Russia and China, and against unpredictable foes such as North Korea and Iran. U.S. forces must be able to survive and fight while countering drones, sophisticated jamming equipment and other electronic and cyber warfare that can track them, disrupt communications and kill them — technology they didn’t routinely face over the last decade.

“If you were to draw a line from here to the DMZ between North and South Korea, both of these sites are on the 38th parallel. And so the weather here accurately replicates the weather that we would encounter in North and South Korea,” said Col. Kevin Hutchison, the training center commander. “What you’re seeing here is Marines fighting Marines, so we are replicating a near-peer threat.”

As a snowstorm swirls around them, Mullen and Hutchison move through the woods, checking in with the young Marines designated as the adversary force of about 250 troops who must prevent more than 800 attackers from gaining control of nearby Wolf Creek Bridge. An Associated Press team was allowed to accompany them to the Marine Corps’ Mountain Warfare Training Center south of Lake Tahoe and watch the training.

Lance Cpl. Reese Nichols, from Pensacola, Florida, and Lance Cpl. Chase Soltis of Bozeman, Montana, dug their defensive position a day ago, and they’ve been watching all night for enemy movement, while using a small burner to melt snow to stay hydrated.

The cold and wet conditions force the Marines to use snowshoes and cross-country skis to get around. They wrap white camouflage around their weapons, struggle to keep the ammunition dry and learn how to position their machine guns so they don’t sink into the powdery snow.

“It’s kind of overwhelming coming up here. Many of them have never been exposed to snow before,” said Staff Sgt. Rian Lusk, chief instructor for the mountain sniper course. “You’re constantly having to dig or move up the mountain range. So, it’s physically taxing, but more than anything, I think, it’s mentally taxing.”

The Marine Corps has changed its training in the mountain course and at Twentynine Palms Marine base 400 miles south. Instead of scripted exercises, trainers map out general objectives and let the Marines make their own battle decisions, replicating a more unpredictable combat situation.

Rather than fighting from forward operating bases that stretched across Iraq and Afghanistan, complete with security forces and chow halls, troops now have to be more independent, commanders say, providing their own protection and support. And they must prepare for a more formidable, high-tech enemy.

Mullen recalled speaking to a commander in Ukraine in the aftermath of Russia’s annexation of Crimea. “He said that within two minutes of keying his handset he had rockets coming in on his position,” said Mullen, who spent two days at Twentynine Palms, watching a battlefield exercise, before flying to the Bridgeport base in California’s Toiyabe National Forest.

The key in both places, said Mullen, is whether the Marines can stay undetected and adjust their battle plan quickly when faced with unexpected threats.

Back on the mountain, Mullen and Hutchison have seized on that issue. The attacking force, members of 2nd Battalion, 1st Marine Regiment out of Camp Pendleton, California, spotted one of the adversary’s fighting positions and fired on it. The simulated attack didn’t hurt anyone, but the competition is real for the defending forces from 2nd Battalion, 7th Marine Regiment, out of Twentynine Palms.

“You took casualties today, and you didn’t respond to it,” Hutchison told the platoon leader, 2nd Lt. Brendan Dixon of Hampton Roads, Virginia.

Why, pressed Mullen, didn’t Dixon move his Marines to a safer location?

In the face of questioning from senior leaders, Dixon held his ground, confident his forces were in the right place to defend the bridge.

It turns out, he was right.

Moving toward the bridge, the attacking forces became trapped on a ridgeline, exposed to the enemy and unable to move through a ravine filled with snow. Gunfire exploded across the ridge.

The final assessment by the trainers was that the attackers suffered 30-40 percent casualties, while Dixon’s troops lost about 10 percent.

The attacking force, said Hutchison, made some decisions that would have resulted in Marine deaths in a real battle, but it’s better to learn now, than in combat.

“In the Far East, whether it’s in northern Europe, etc., we’re replicating that here. And what we’re finding is, it’s an extremely challenging problem,” said Hutchison. “And it’s a problem that, frankly, if we don’t train to, it’s going to cost a lot of Marine lives.” /gsg