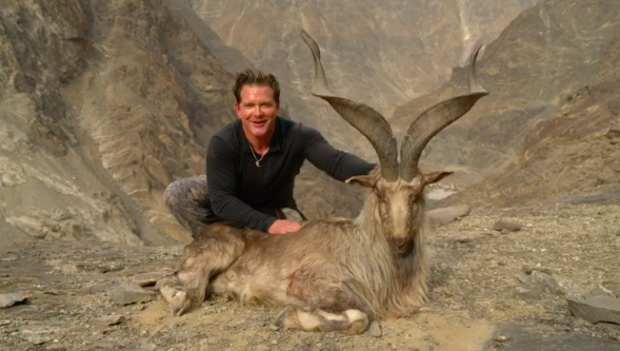 A trophy hunter recently paid $110,000 (P5.7 million), the highest ever, to hunt an Astore markhor in the Sassi village of Gilgilt, Pakistan.

The hunter, identified as Bryan Kinsel Harlan of Texas, paid the staggering amount as permit fee for hunting the rare mountain goat, as per Pakistani newspaper Dawn on Feb. 5.

Harlan successfully killed a “41-inch markhor trophy,” the report said, which is a good-sized trophy. A video of Harlan hunting the magnificent goat was shared on Facebook on Feb. 5 and showed the hunter traversing the rocky mountains before positioning himself 200 yards away to shoot the markhor.

Harlan can then be seen proudly high-fiving a companion before hauling the markhor to the ground. He then posed with the dead markhor afterwards.

“It was an easy and close shot,” Harlan was quoted as saying in the report. “I am pleased to take this trophy.”

Bryan Kinsel Harlen Markhor hunting in Pakistan.. we all have our likes and dislikes but be responsible and mature to make comments….thanks

Harlan is the third American to hunt the rare mountain goat, as per the report. Two American citizens paid $100,000 and $105,000 respectively last January to hunt Astore markhors.

The markhor (Capra falconeri) was considered endangered from 1994 to 2008, as per the International Union for Conversation of Nature’s Red List of Threatened Species (IUCN Red List). In 2015, it obtained “near-threatened” status, with a population of around 5,700.

Markhors face threats from hunters and wood loggers, livestock farming and ranching, among others. Cody Cepeda/JB