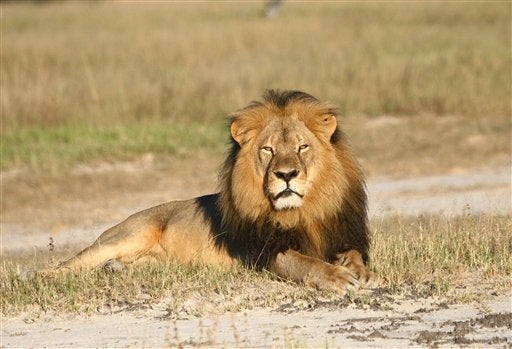 In this undated photo provided by the Wildlife Conservation Research Unit, Cecil the lion rests in Hwange National Park, in Hwange, Zimbabwe. Two Zimbabweans arrested for illegally hunting a lion appeared in court Wednesday, July 29, 2015. The head of Zimbabwes safari association said the killing was unethical and that it couldnt even be classified as a hunt, since the lion killed by an American dentist was lured into the kill zone. Andy Loveridge/Wildlife Conservation Research Unit via AP

JOHANNESBURG, South Africa—South African animal rights group the NSPCA on Monday said it has obtained a warrant in its attempt to stop a week-long large game hunt that could see hundreds of animals die.

Game such as gemsbuck, wildebeest, warthogs, and impalas have already been killed in the hunt, the group said, which is set to take place on a private reserve in the Limpopo region.

Critics say the method of killing, which involves tracking the beasts then driving them toward hunters waiting on special platforms, though legal is cruel as animals are often only wounded and then left to die a slow and painful death.

The NSPCA was granted a warrant by a South African court, and can bring charges against the organizers if they see signs of cruelty towards animals during the hunt.

“Our team has successfully obtained a warrant to gain access to the farms for the next four days,” the National Council of Societies for the Prevention of Cruelty to Animals in South Africa said on its Facebook page.

“Please be assured that we are doing everything possible to stop the hunt.”

READ: US hunter tied to Cecil the lion killing headed back to work

The controversy comes just over two months after Cecil the lion was killed by an American recreational game hunter in Zimbabwe, causing a global outcry against inhumane hunting.

The NSPCA said some animals have already been killed during the organized hunt.

“We can confirm that 18 animals were killed today, including gemsbuck, eland, wildebeest, warthogs, impala and duiker,” said the Facebook post.