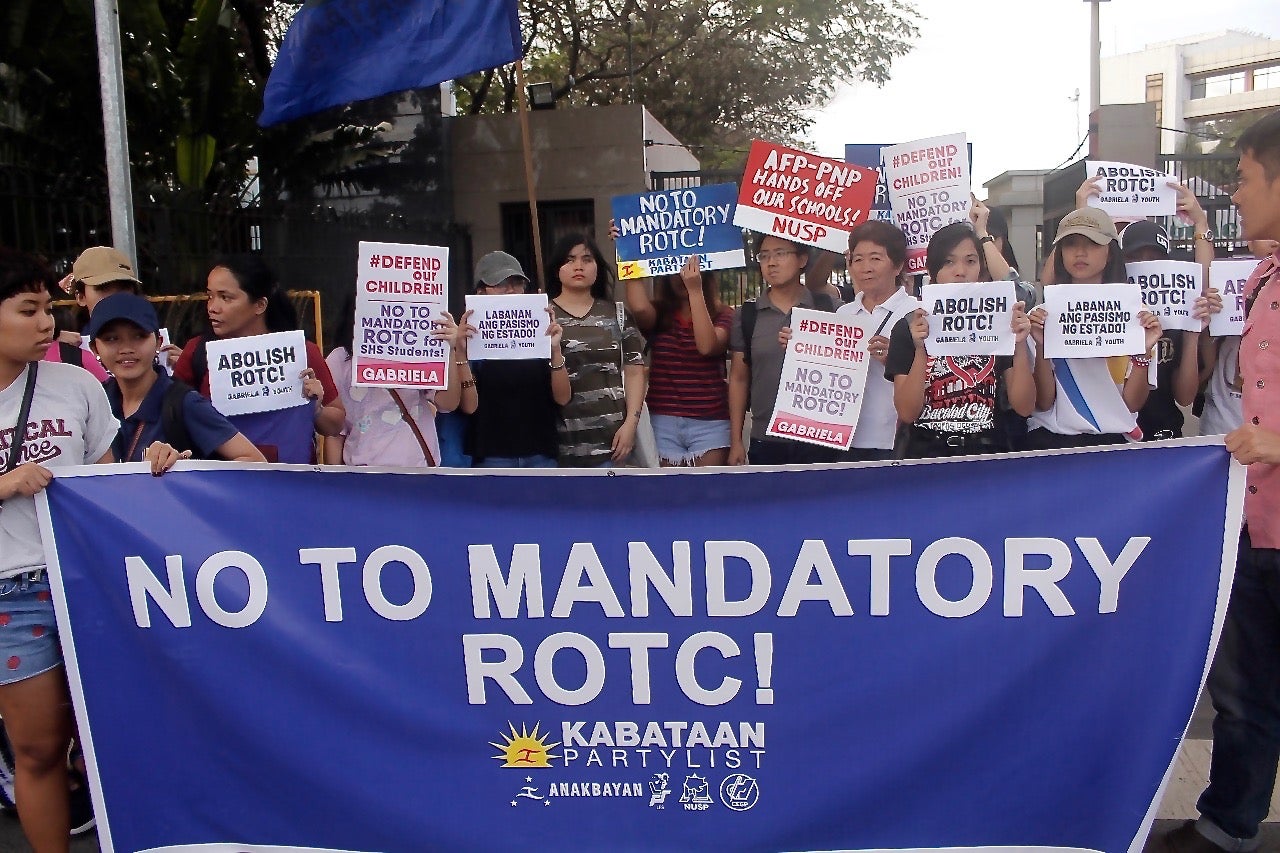 Members of youth groups protested outside the House of Representatives on Monday, denouncing proposals to lower the minimum age of criminal liability (MACR) and revive the Reserved Officers’ Training Corps (ROTC). (Photo by Gabriel Pabico Lalu)

MANILA, Philippines — The House of Representatives swiftly approved on second reading a bill seeking to revive the mandatory Reserve Officers Training Corps (ROTC) for grades 11 and 12 in public and private schools nationwide as a requisite for graduation.

House Bill No. 8961 was approved on second reading via viva voce or a vote of “ayes” and “nays.” The proposed law was approved by the committee on basic education and culture last Jan. 30.

The bill, which seeks to amend Republic Act No. 7077 or the “Citizen Armed Forces of the Philippines Reservist Act,” claims to “instill patriotism, love of country, moral and spiritual virtues, respect for human rights and adherence to the Constitution.”

The following students may be exempted from the conduct of ROTC:

– Those who are physically or psychologically unfit;
– Those who have undergone or are undergoing similar military training;
– Those who are chosen by their school to serve as the school’s varsity players in sports competition;
– Those who may be exempted from training for valid reasons as approved by the Department of National Defense, upon recommendation by an educational institution where the concerned student is enrolled.

During the period of amendments, Nueva Ecija 3rd District Rep. Rosanna Vergara suggested removing the mandatory advanced ROTC program in tertiary institutions under Section 6 of the bill, as well as the provision allowing graduates of the said program to be eligible for commissionship or enlistment in the AFP. The amendment was accepted.

Vergara also introduced an additional sentence to Section 4 of the bill: “In no way shall the ROTC be used for political aims to teach and instill a particular ideology, and as a mechanism for hazing and abuse.” The amendment was likewise carried.

The lawmaker also added two new sections establishing the ROTC Grievance Board to investigate and resolve complaints in the ROTC program, and holding liable the educational institution and its instructors in-charge of the program for any damage or injury caused to a student during the implementation of the ROTC. Both changes were accepted subject to style.

Kabataan Rep. Sarah Elago objected to the approval of the bill, saying the program “brings a false sense of nationalism and patriotism.”

“What we need are genuine efforts to address issues in basic education, not militarization. What we need is an army of youth conscious of their historic role as the hope of our land, not forcibly trained in the mercenary tradition of blind obedience to authority and only to be used as pawns in silencing the people,” she added.

On November 2018, President Rodrigo Duterte urged Congress to “expedite” the restoration of ROTC for senior high school students to “instill patriotism, love of country among our youth.” If Congress fails to act on it, he said he might issue an executive order (EO) to require it./ac