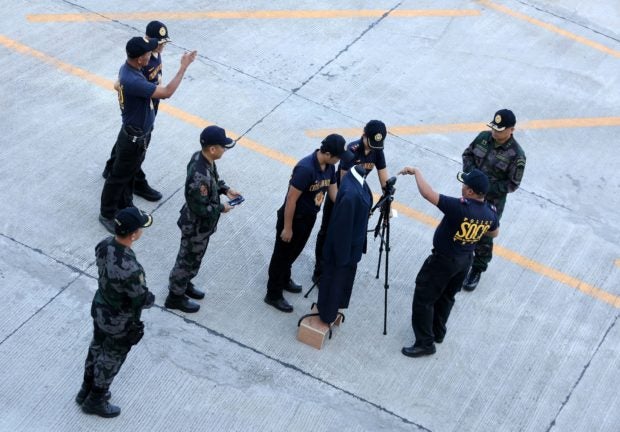 In a file photo taken on July 05, 2018, SOCO team and PNP officials (SAF) with a mounted range finder set beside a suit representing the figure of Mayor Antonio Halili on the spot where he was shot dead in the parking area of Tanuan City Hall, Batangas. A re-enactment was held by the PNP as part of their investigation into the killing of Halili. The re-enactment’s aim was to determine the trajectory, exact location of the gunman and escape route used. INQUIRER PHOTO / LYN RILLON

MANILA, Philippines – The Calabarzon PNP will be widening the investigation into the murder of Tanauan City Mayor Antonio Halili to include his vice mayor, now acting Mayor Jhoanna Corona Villamor, who was apparently seen smiling and laughing in a video taken when the mayor was shot during a flag ceremony in July 2018.

Chief Supt. Edward Carranza, Calabarzon Police Regional Director, said the police would investigate deeper the case to determine all possible angles and identify the people who collaborated to eliminate Halili.

It can be recalled that Halili was assassinated at the Tanauan City hall grounds while attending a flag ceremony.

A new angle of the video was furnished to the PNP and officials themselves were perplexed by what they saw.

“The video is shocking, she [Villamor] is smiling and acting that way when everybody was in panic. It’s a new angle and we will investigate,” Carranza said in an interview with Radyo Inquirer.

Carranza was also baffled by the reaction of the vice mayor in the video saying every single person attending the flag ceremony was either in shock or in fear except for Villamor.

The PNP will be leaving no stone unturned and will consider and pursue every lead possible to resolve the seven-month-old murder case.

A bullet, possibly fired from a sniper’s rifle, pierced the chest of the 72-year-old mayor as he and around 400 municipal government employees sang the national anthem outside City Hall at 8 a.m.

Halili was shot by a gunman positioned several meters away from the city hall where the perpetrator possibly used a long rifle and a scope to target the chief executive in the chest.

A few days later, Villamor took over the helm at the Tanauan City government as acting mayor.