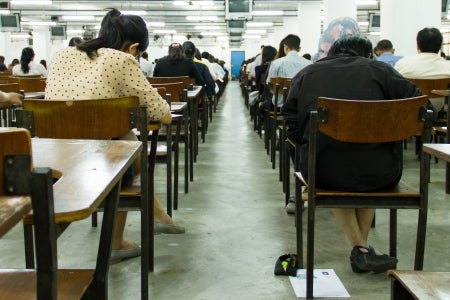 “Have you ever had sexual relations with the opposite gender?” “Can you discuss what it feels like to give birth?” “Describe your dream lover.”

These were just some of the questions that appeared in an end-of-term exam that baffled the second year students of Beihai College of Art and Design in Guangxi Zhuang autonomous region, southern China.

The exam, which was on “Mao Zedong Thought and Socialism with Chinese Characteristics Ideology,” earned flak from students for its irrelevance to their course material, as per news site Guancha via South China Morning Post on Jan. 21.

The questions were apparently formulated by the school’s dean, who wrote the school’s literature and “ideology and law foundations” tests. Some of the questions ranged from the personal to the absurd, such as “Have you ever had a secret relationship?”, “Do you want to end your family line?” and “Is it important to choose your spouse’s genes?” among others.

One student has since shared that they were “stunned” upon seeing their exam papers. They, however, did not say anything out of fear for their grades.

“We were like chickens forced to eat rice by someone pressing down on the neck, to be slaughtered if we do not eat,” the student said in the report.

The Beihai College of Art and Design has yet to release a statement regarding the incident, as of this writing. Cody Cepeda/JB