There are those lucky enough to score luxury boxes in Fate’s pecking order, and there are some left on the cheap seats to pick up the crumbs. Some kids get driven to school by service or a few are dropped off by their parents with a wet kiss and a filled lunchbox, but such is never the case for the likes of little Wang Fuman from Shaoton, Yunnan province, in China.

Eight-year-old Fuman takes an hour to walk 4.5 kilometers to school everyday, according to the official Facebook page of People’s Daily, China.

His photograph, which had gone viral across social media, was snapped by his teacher in the morning of Jan. 8, the first day of the class’ final exam. It shows Fuman with icicles in his hair and eyebrows, and rubescent-flushed cheeks after a long walk in the biting cold. His classmates in the background are seen laughing at him.

Fuman had no gloves and no earmuffs, and his jacket hardly looked as if it kept him warm. The temperature was -9 degrees Celsius.

But even so, Fuman’s sorry snowy misfortune wasn’t enough to smote and trifle with his spirit; not soured by the state of affairs, he entered the classroom and pulled a funny face to his classmates. 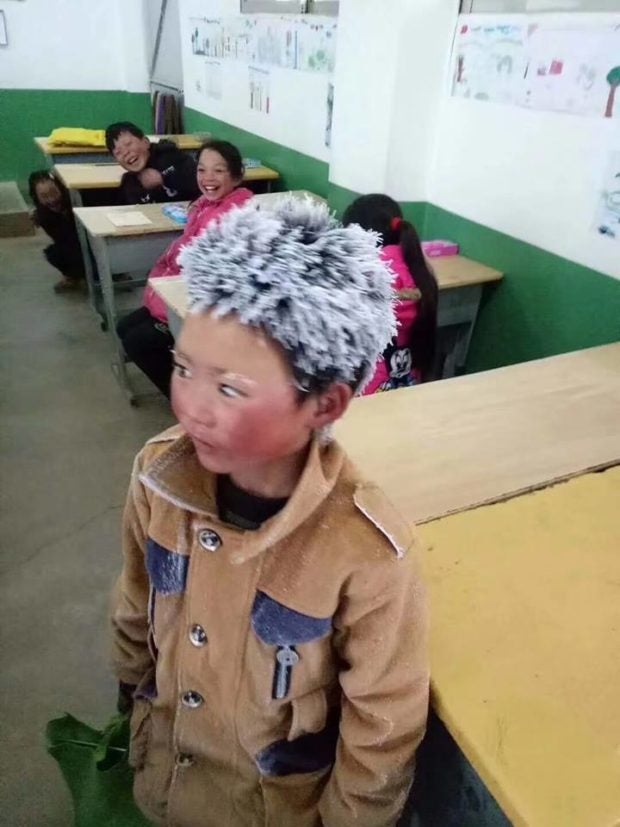 Fuman was borne from a mother who had long abandoned the family and an absent migrant father compelled to work in another city due to poor circumstances.

He also lives in a mud house with his older sister and grandmother, as reported in an interview with social media site Pear Video via The Straits Times. Fuman told Pear Video that aside from school, he helps his grandmother in farming, resulting in rough scabby hands in dire need of salve.

Little Fuman also mentioned that he missed his father who he hadn’t seen for months on end. Cody Cepeda/JB