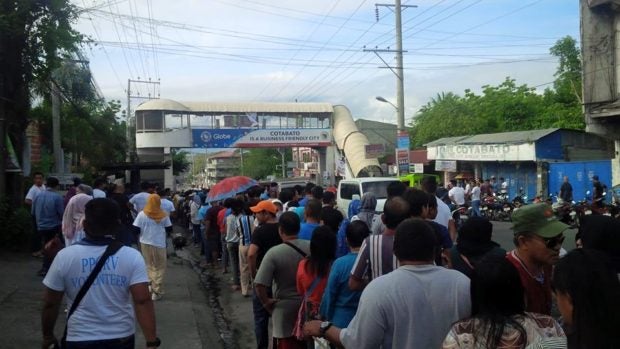 MANILA, Philippines – The Philippine National Police (PNP) is confident that it will be able to replicate on February 6 the same level of safety and security arrangements laid out during Monday’s Bangsamoro Organic Law (BOL) plebisicite.

“There are a couple of incidents but generally it was peaceful. Everything went smoothly, and we expect that we will maintain the same level of safety and security until the end of the plebiscite and even beyond that,” PNP spokesperson Chief Supt. Benigno Durana Jr. said.

Another BOL plebiscite is scheduled on February 6 in the six municipalities of Lanao del Norte and 39 villages in North Cotabato which petitioned for inclusion in the Bangsamoro.

In Cotabato City, at least 66 teachers did not show up in voting centers due to threats they received on Sunday night, causing delays in the conduct of the plebiscite, said lawyer Rey Sumalipao, Comelec Regional Director for the ARMM.

They were replaced by police officers trained to act as members of the Board of Election Inspectors, according to Supt. Aldrin Gonzales, spokesperson of the Police Region Office Soccsksargen.

On the eve of the plebiscite, two explosions rocked the residential compound of Judge Angelito Rasalan of the Municipal Circuit Trial Court in Upi, Maguindanao.

Police later said they are eyeing personal grudge as the motive behind the explosion, but are not discounting the possibility that it could be related to the plebiscite.

Hours after the twin bombings, a fragmentation grenade was also seen near a national high school in Barangay Rosary Heights 1 in Cotabato City on Monday morning.

“The Bangsamoro Organic Law will be ratified and the Bangsamoro government will be established immediately after the ratification. We are very hopeful that BOL will be an instrument for peace, an instrument for progress and development,” Murad said as he cast his vote at Simuay Junction Central Elementary School in Sultan Kudarat.

READ:MILF Chief Ebrahim Murad on plebiscite: There is light at end of tunnel

The BOL, if ratified, would abolish the ARMM and replace it with the Bangsamoro Autonomous Region in Muslim Mindanao (BARMM) ./gsg