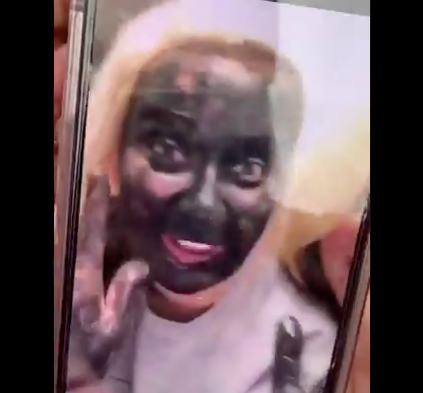 A student from the University of Oklahoma recently came under fire after a video of her wearing a “blackface” made the rounds in social media. Blackface is makeup done on theater performers, usually non-black, who have to play black roles.

The viral video was posted on Twitter by a certain Gabby (@GabbyHahaa) on Jan. 18. It showed an unnamed female student, whose face was covered with black paint, along with a friend. Amid their laughter, the girl with the painted face turns to the camera and says, “I am a nigger” while her friend embraces her from behind.

“Some girls that attend OU thought it would be funny (especially Olivia Urban and Francis Ford) to put black paint on their face and say ‘I am a nigger,’” wrote the netizen. “@UofOklahoma #whatareyougoingtodo????”

Some girls that attend OU thought it would be funny (especially Olivia Urban and Francis Ford) to put black paint on their face and say “I am a nigger” @UofOklahoma #whatareyougoingtodo ???? pic.twitter.com/ccWGnG4L7N

As per recent reports, the female student has since been expelled from the university, even though she and the other person involved in the video were regretful and “offered to apologize.” Prior to the expulsion, the video earned much criticism from the university’s administration and black student association alike, who addressed the video in separate statements on social media.

The University of Oklahoma took to their official Facebook page and website where they expressed offense and disappointment over the video.

“We were made aware of an inappropriate and derogatory video circulating on social media of two OU students,” the statement read. “The University of Oklahoma abhors such conduct and condemns the students’ actions and behavior in the strongest terms possible.”

A letter from the President to the OU community.🔗 https://link.ou.edu/2RUkbST

Posted by The University of Oklahoma on Friday, January 18, 2019

Meanwhile, the OU Black Student Association condemned the act and demanded for a zero-tolerance policy in the university’s code of conduct, among other things.

“It is our belief the university should take a stance and here is what we demand: a zero-tolerance policy of hate speech added to the University of Oklahoma Student Code of Conduct,” the black student association said.

This is the Black Student Association’s official response. #BetterTogether

They also called for an enhanced curriculum to educate students about cultural competency, an increase in multicultural staff and faculty, as well as additional financial assistance for the university’s African-American programs.

Meanwhile, the Tri Delta Chapter gave an update through a statement by chapter president London Moore, stating that the blackfaced female student is no longer a part of their organization.

“Our chapter condemns the racist, offensive and disgraceful conduct of the two women involved in the video posted yesterday,” they wrote on Jan. 18. “More specifically, we are deeply disappointed in the actions of the one woman associated with the Theta Gamma chapter of Tri Delta.”

“Chapter leadership has met and appropriate action has been taken,” the statement read. “The woman who participated in, filmed and posted the video is no longer a member of our organization.”

This is not the first time the University of Oklahoma had to expel a student over a racist video. Two students were also expelled back in March 2015 after they were identified as leaders of a racist chant during a fraternity event. Cody Cepeda/JB