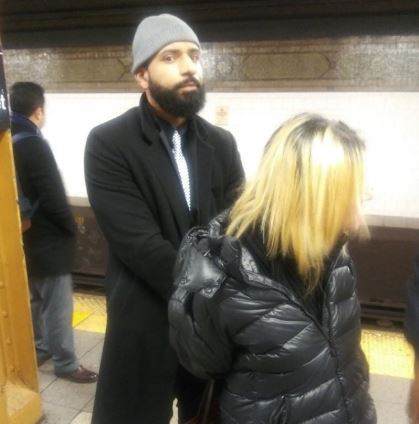 One subway rider performed a citizen’s arrest on a woman after she violently attacked a fellow passenger inside the train by using her keys and umbrella, as well as spitting and hurling racial slurs.

The incident happened in Brooklyn, New York City on Dec. 12 before 8 a.m. and was captured on video by Juan Ayala. Ayala has since shared the video on Facebook and Twitter, which has thus far garnered millions of views and  hundreds of thousands of reactions from netizens.

In Ayala’s video, the woman, identified as 40-year-old Anna Luschchinskaya, can be seen yelling at a younger woman in the train.

“F*ck off!” she said repeatedly. She eventually took off her gloves and sunglasses and tied her hair before taking out an umbrella and a bundle of keys from her bag.

To give context to everything, I know a lot of y’all have questions about what happened on the train yesterday, so here is the video of the racists lady going crazy on this little girl smh 🤦🏾‍♂️

A few moments later, she started kicking the young woman, who tried to kick back in defense. One man attempted to diffuse the fight, but was unsuccessful as Lushchinskaya extended her foldable umbrella and used it to hit the young woman, along with her keys.

“Don’t f*cking touch me!” she yelled at the mediator. “You’re f*cking retarded.”

“It’s too early for this…,” Ayala can be heard yelling. “She’s not even fighting you back.”

Another man steps in and takes Lushchinskaya’s umbrella away, which had snapped from its handle.

Uproar arose from other subway riders, however, when Lushchinskaya spat at the young woman and called her a “F*cking chink.” She also gave her the middle finger.

Ayala later on goes up to Lushchinskaya to confront her. After a few heated moments, she spat on the floor and called him “F*cking Muhammad” before smacking his phone away. That was when Ayala forcibly grabbed her, took her down on the ground and held her until the police came.

“She tried me so I had to detain her until the cops showed up,” Ayala wrote on Twitter last Dec. 12.

In his post, he shared a photo of him detaining Lushchinskaya in the station by locking her arms behind her back and another that showed her being handcuffed by authorities later on.

Then she tried me so I had to detain her until the cops showed up 🤦🏾‍♂️ pic.twitter.com/C3UybusAxa

Meanwhile, New York Police Chief of Transit Edward Delatorre took to Twitter on Dec. 13 and said that Lushchinskaya had been arrested and charged with felony assault.

“ARRESTED: 40-year-old Anna Lushchinskaya was arrested by officers from Transit District 34 in Brooklyn and charged with felony assault in this case,” Delatorre wrote. “Thank you to everyone who intervened and provided information.”  /ra