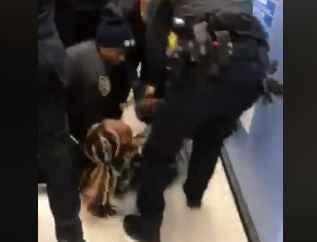 In a harrowing video, a mother was shown on the floor of a social services center in Brooklyn, New York, embroiled in a tug of war with a group of police officers, as they tried to yank her baby from her arms.

The mother, Jazmine Headley, can be heard screaming, “They’re hurting my son, they’re hurting my son!” while she held on to her 1-year-old child Damone. After moments of struggle, Damone was eventually wrenched from Headley and she was handcuffed by the authorities.

Headley came to the Human Resource Administration (HRA) that day to ask for day care vouchers for her baby so she would be able to work as a cleaner. As per ABC7 on Dec. 10, the HRA was crowded and slow that day, and there were no chairs for Headley to sit on, so she sat on the floor with her son to wait.

So I’m At 275 Bergen Street Handling My Business Or Whatever & There Wasn’t Any More Chairs For This Lady To Sit Down So She Sat In The Corner On The Floor. The Security Guard Came Over Said What Ever She Said To Her & She Made The Security Guard Feel Dumb So She Called The Cops On Her & This Was The Outcome SMH Mind You She Had Her Baby In Her Hands The Whole Time🤦🏽‍♀️🤦🏽‍♀️🤦🏽‍♀️ I'm So Fucking Disgusted with The NYPD😡😡 EVRYBODY PLEASE SHARE!!! I’m a mother myself & I would’ve lost my fucking mind if this was me they would've had to kill me🤬🤬🤬🤬

An HRA officer ordered Headley to move out of the way so as not to block any passageways. When Headley refused because there were no seats, five other security guards were called, and eventually, police officers from the New York Police Department as well.

“Everyone… was like, ‘leave the girl alone, she’s not bothering anyone, just sitting there like all day,'” Nyasia Ferguson, a witness who also managed to take a video, was quoted as saying. “They kept harassing her.”

The authorities have charged Headley with resisting arrest, trespassing, obstruction and acting in manner injurious to a child.

The virality of the video has since prompted various institutions to condemn the act. The NYPD called the video “troubling,” whereas Brooklyn District Attorney Eric Gonzalez took to Twitter on Dec. 12 to issue a statement on the “awful scenario. ”

“I was horrified by the violence depicted in the video and immediately opened an investigation into this case,” Gonzalez expressed. “It is clear to me that this incident should have been handled differently.”

Gonzalez said that Headley was on her way out of the center when an HRA officer escalated the situation, “creating an awful scenario of a baby being torn from his mother.”

He also believed that the consequences Headley had suffered from the traumatizing incident far outweigh whatever conduct that may or may not have led to it.

“Continuing to pursue this case will not serve any purpose,” said Gonzalez. “I therefore moved today to dismiss it immediately in the interest of justice.” Cody Cepeda/JB