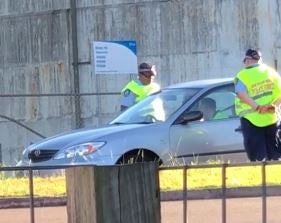 An officer from New South Wales, Australia, was captured on video hitting a Chinese driver and telling him to go back to China.

The incident was recorded on video by witness Caleb Strik. On Dec. 25 he took to Facebook to share videos of the “racist” police officer harassing the driver of a Toyota Camry.

In one video, the officer can be seen speaking to the driver in question. Moments later he makes him read a “Stop Police” sign before giving him a rough shove.

“Racist policeman telling the Chinese guy to go back to China and then hitting him,” wrote Strik. “How can an import Indian police officer tell a Chinese guy to leave Australia?”

Racist policeman telling the Chinese guy to go back to China and then hitting him!!!!! How can an import Indian police officer, tell a Chinese guy to leave Australia 🤔🤔🤔

In another video, Strik confronted the police officer for hitting the driver. “I’m recording this to make sure you understand,” he told the officer. “I have a video of you hitting the worker and you also told him go back to China, I got it on video.”

“It’s got nothing to do with you… move away, you are harassing me,” the officer said, dismissing him.

Strik also confronted a female police officer who told him to step back.

“Did you see him hit him? He also told him to go back to China,” Strik said.

But the female police officer answered, “What’s it have to do with you?”

Strik’s video has since garnered over 600,000 views and almost 8,000 shares. The New South Wales Police Force, via ABC on Dec. 27, has since stated that they were investigating the incident.

Meanwhile, a Change.org petition has been set up by Australians calling for action against the police officer. As of this writing, over 4,700 people have signed the petition.  Cody Cepeda /ra