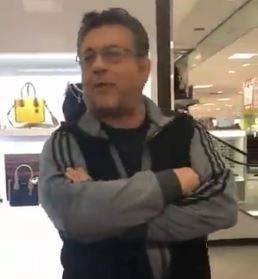 A man in a Macy’s store in Dallas, Texas was captured on video harassing two employees, verbally attacking them with racial slurs, after hearing them speak Arabic to each other.

The recorded incident was posted on social media by a certain Ricky (@rickyy_____) via Twitter last Dec. 24.

In the first video, the unidentified man can be seen talking over two female employees of a Michael Kors store while fellow shoppers tried to defend the women. The man can be heard saying, “I don’t speak Arabic, they were speaking in Arabic.”

I really walked into a Twitter video irl today… pic.twitter.com/TjxPaxwbEh

“This man made two women cry after publicly humiliating them,” wrote the netizen in another video on Dec. 25. “Please help me find this awful guy’s information.”

“All you Arabs and Democrats,” the man continued to say. “Go back where you came from. I cannot see how many Arabs came out of the woodwork.”

Part 2.
this man made two women cry after publicy humiliating them. Please help me find this awful guy’s information pic.twitter.com/PmwHfFtr6H

As per Ricky’s narration on Twitter, around 10 to 12 people at Macy’s came to the employees’ defense. He, too, was targeted by the man with homophobic slurs when he tried to confront him.

“When I confronted the guy for making the women cry, he shouted homophobic slurs, said to get out of his face [because] he paid $300…” he wrote. “I decided to record after he threatened to call the cops to have proof the employee did nothing wrong.”

He added that the racist man left the mall before anybody could get his information.

“I also believe a police report was filed for him continually harassing people, but the dude left so no one knew his info,” he said. “I just want to help find the guy to help, but don’t dox him.”

A spokesperson for Macy’s has since given an update regarding the matter and said the incident is currently being investigated, as per BuzzFeed News on Dec. 26.

“We believe our Macy’s employees and customers should be treated with dignity, respect, and kindness,” the spokesperson said in the report. “We aim to create a welcoming environment and we apologize for what occurred in our store. We are investigating this incident.” Cody Cepeda/JB

Read Next
Man broke into home, got owner to give him a ride
EDITORS' PICK
PNP to maintain checkpoints during GCQ to ensure compliance to health protocols
DOTr bares 2 phases of public transport revival in GCQ areas
LIST: What to expect in areas under GCQ, MGCQ
Cherry Mobile teams up with Cloud Panda PH, launches online store
SM prepares for ‘safe malling’
Notice of 2020 regular meeting of stockholders June 18, 2020
MOST READ
LIST: What to expect in areas under GCQ, MGCQ
Duterte approves Metro Manila’s shift to GCQ starting June 1
DOH explains: Only 109 of record-high 539 COVID-19 patients were ‘fresh cases’
OFW back in Leyte hometown but tests positive for coronavirus
Don't miss out on the latest news and information.