HSINCHU, Taiwan – Taiwan held live-fire exercises along its east coast Thursday amid renewed threats from China to bring the island under its control by force if deemed necessary.

Artillery and assault helicopters fired at targets off the west coast city of Taichung, while French-made Mirage fighter jets took off amid rainy conditions from the air base at Hsinchu to the north.

The drills are Taiwan’s first since Chinese President Xi Jinping on Jan. 2 reasserted Beijing’s willingness to use military force to bring self-ruling Taiwan under Chinese control.

The drills also follow a new Pentagon report laying out U.S. concerns about China’s growing military might, underscoring worries about a possible attack against Taiwan.

Taiwan’s independence-leaning President Tsai Ing-wen has made national defense a priority while refusing China’s demand that she recognize Taiwan as a part of China. That’s led to Beijing ratcheting up economic, military and diplomatic pressure on the island of 23 million.

In a meeting with U.S. Chief of Naval Operations Adm. John Richardson in Beijing on Tuesday, China’s Chief of Staff Li Zuocheng issued a warning against foreign forces coming to Taiwan’s assistance. The U.S. is Taiwan’s chief source of military hardware and is legally bound to respond to threats against its security. 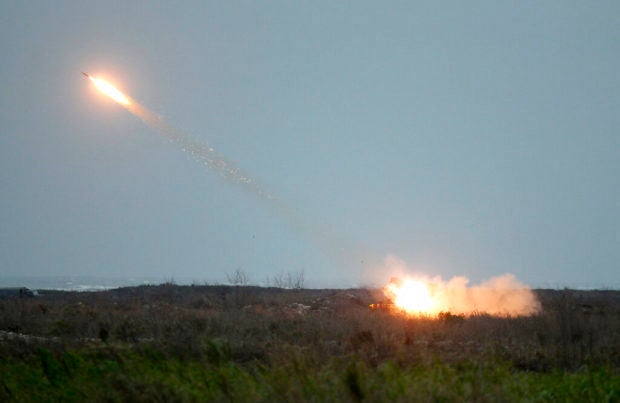 A rocket is fired from a Thunderbolt 2000 multi-rocket launcher during a military exercises in Taichung, central Taiwan, Thursday, Jan. 17, 2019. Taiwan’s military has conducted a live-fire drill on Thursday to show its determination to defend itself from Chinese threats. (AP Photo/Chiang Ying-ying)

China’s military will “pay any price” to ensure China’s sovereignty, Li told Richardson at their Tuesday meeting. China considers Taiwan, which split from the mainland amid civil war in 1949, as an integral part of Chinese territory.

U.S.-China relations have become increasingly frayed on the military and economic fronts over the past year. President Donald Trump imposed tariff increases of up to 25 percent on $250 billion of Chinese imports over complaints Beijing steals or pressures companies to hand over technology. Xi responded by imposing penalties on $110 billion of American goods.