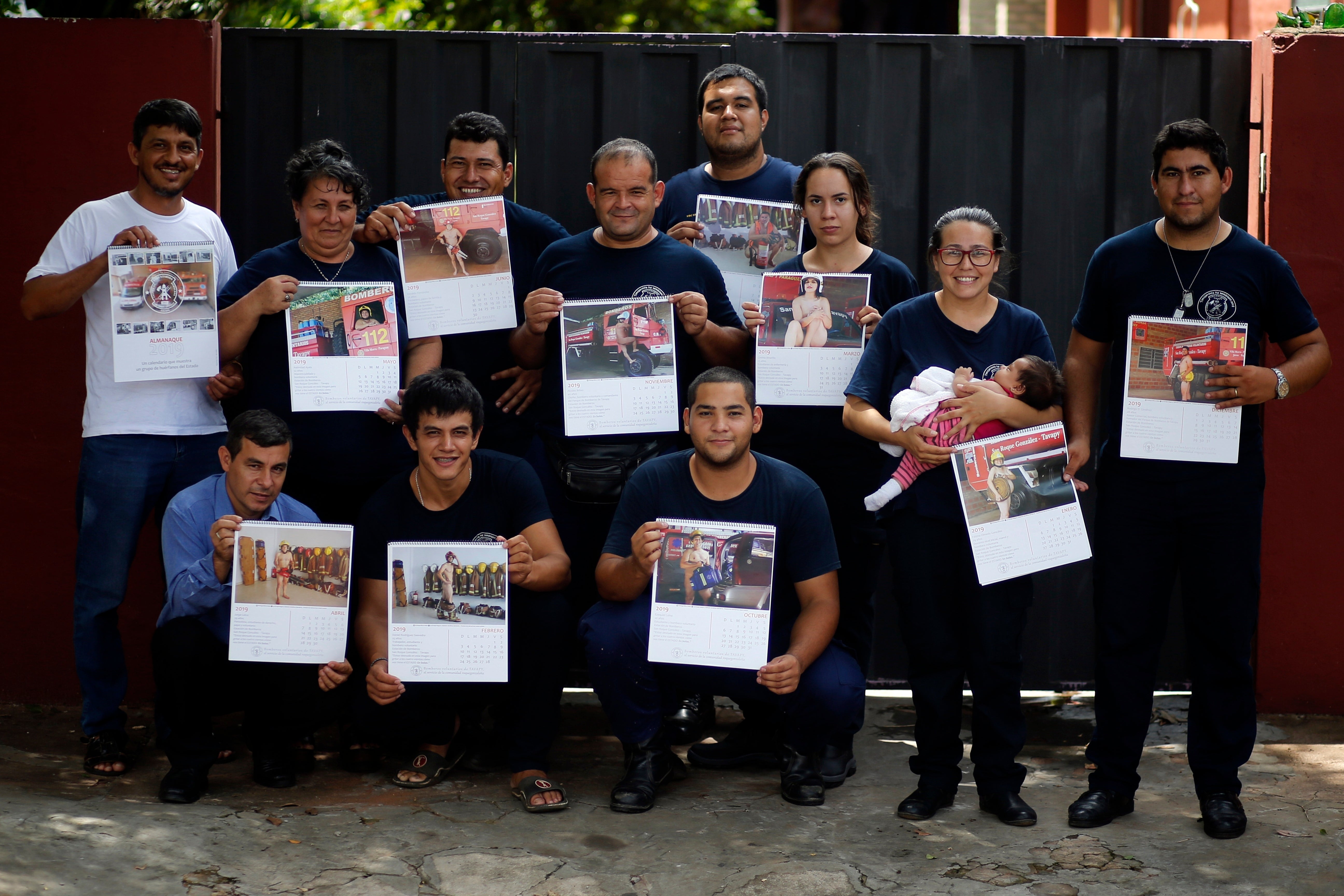 The firefighters of San Roque Gonzalez pose for a group photo before going out in the streets to sell calendars, in Asuncion, Paraguay. Since its recent publication, though, the calendar has spread like a wildfire in the socially conservative South American nation. (AP)

SAN ROQUE GONZALEZ, Paraguay — Fatima Olmedo was first to pose naked for the calendar, holding a rolled-up hose in her hands that barely covered her pregnant belly.

Other volunteer firefighters then followed. There’s Jorge Leiva, who used a chain saw to cover the area south of his navel and north of his knees. And Daniel Rodriguez who proudly dropped his suspender trousers all the way to his rubber boots.

The caption at the bottom of every photograph reads: “I’ve stripped for this image because that’s how the State keeps us: buck naked.”

Month-by-month, they bare it all in photos to raise money and demand resources from the government for their station in this small city on the outskirts of Paraguay’s capital. 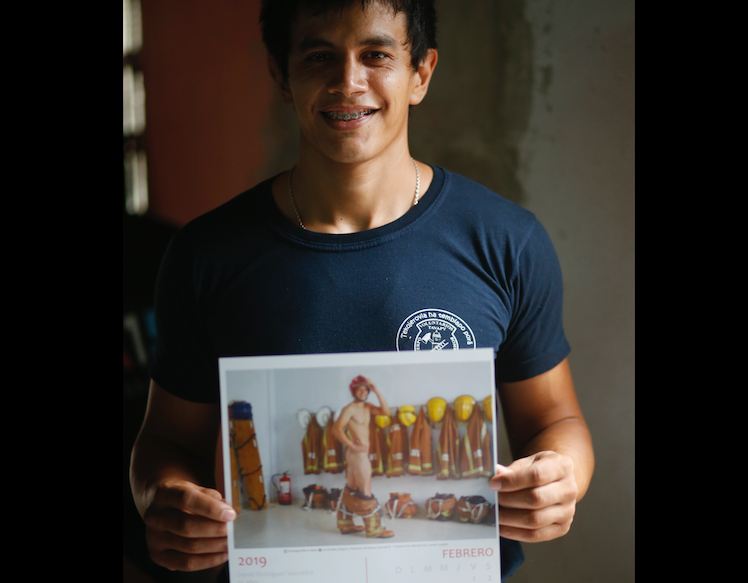 Firefighter Daniel Rodriguez poses holding a calendar page with a nude photo of himself, in Asuncion, Paraguay. The caption at the bottom of every photograph reads: “I’ve stripped for this image because that’s how the State keeps us: buck naked.” (AP)

“We’re protesting like this because that’s how we’re working: We’re practically naked,” said Fire Chief Alcides Britez, who is pictured in the November page smiling as he climbs up a red fire engine wearing nothing but a helmet.

“The firefighters at the San Roque Gonzalez station lack health insurance, which puts us at risk all the time,” said Britez, who is also an ambulance driver at the local health center.

Other members of the department juggle firefighting duties with jobs as teachers, journalists or plumbers. Some attend nursing school or are finishing a law degree.

“My earnings come from the appreciation and the gratitude of people,” volunteer firefighter Silvia Britez said. “That’s worth much more than any salary.”

But the firefighters struggle to keep up with the costs, often using their own money to buy protective gloves. The station gets about $600 a month to serve the 16,000 residents of San Roque Gonzalez. But firefighters say that fuel and maintenance of the equipment, which includes an ambulance and a fire engine donated by Spain, costs about $1,000 a month. 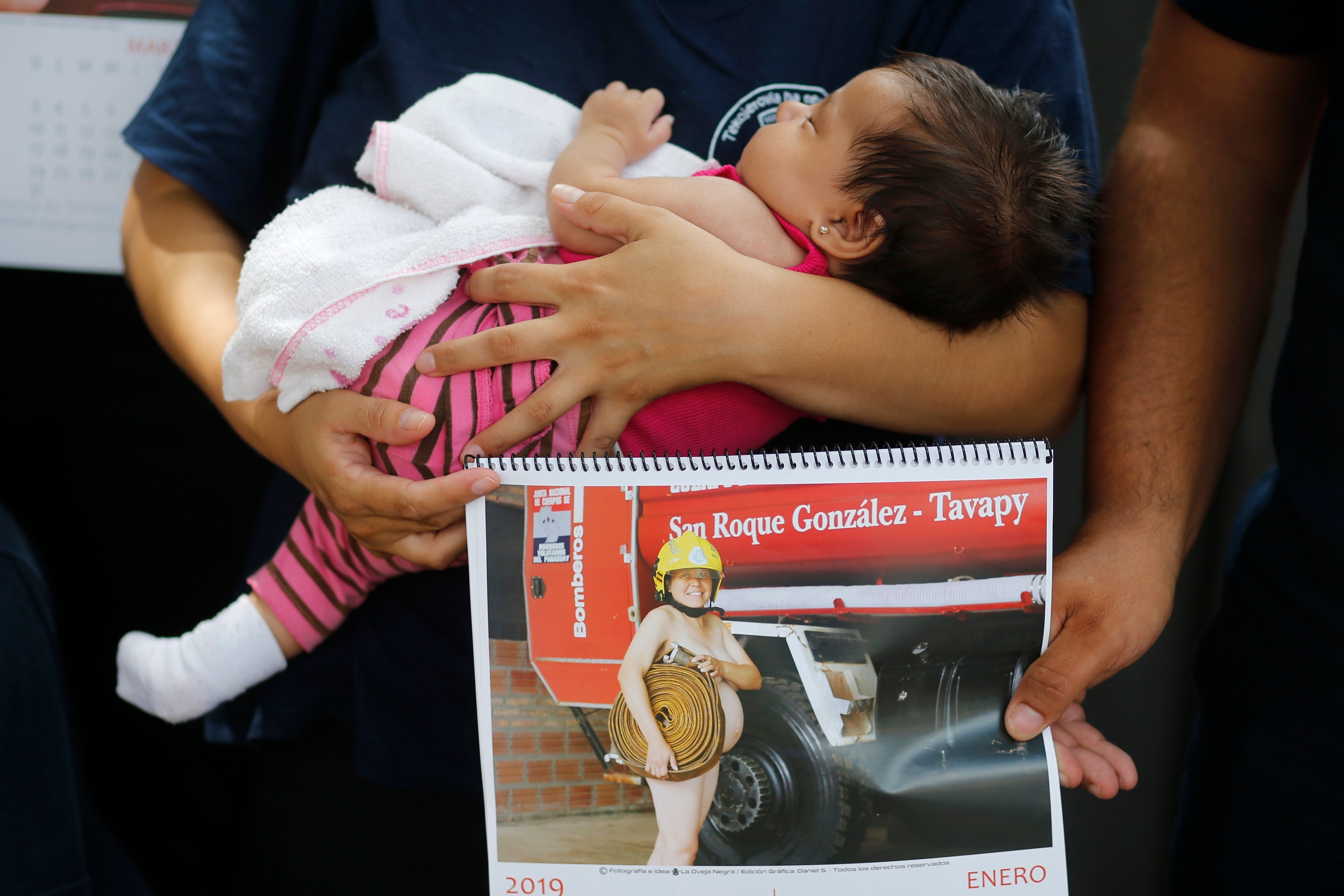 Firefighter Fatima Olmedo holds her two-month-old baby Samara as her husband holds a calendar page with a photo Olmedo posing nude while pregnant, in Asuncion, Paraguay. Olmedo was first to pose naked for the calendar, holding a rolled-up hose in her hands that barely covered her pregnant belly. (AP)

The idea for the calendar arose during a photography class taught by Spanish photographer Jose Maria Guerrero.

“I have several students who are volunteer firefighters, and the idea came about when we were discussing the movie ‘The Full Monty,'” he said, referring to the British comedy about a group of men who form a strip troupe.

“It’s a process that lasted about six months. First, I had to convince them that there’s nothing wrong with posing naked for a photo. This is a small town made up of mostly farmers, and not given to sudden changes,” Guerrero said.

Since its recent publication, though, the calendar has spread like wildfire in the socially conservative South American nation.

“There are some people who are not in favor of this. … They’re closed-minded. But they’re just a few,” said Britez. “Most people agreed with this. They liked it. They support us.” 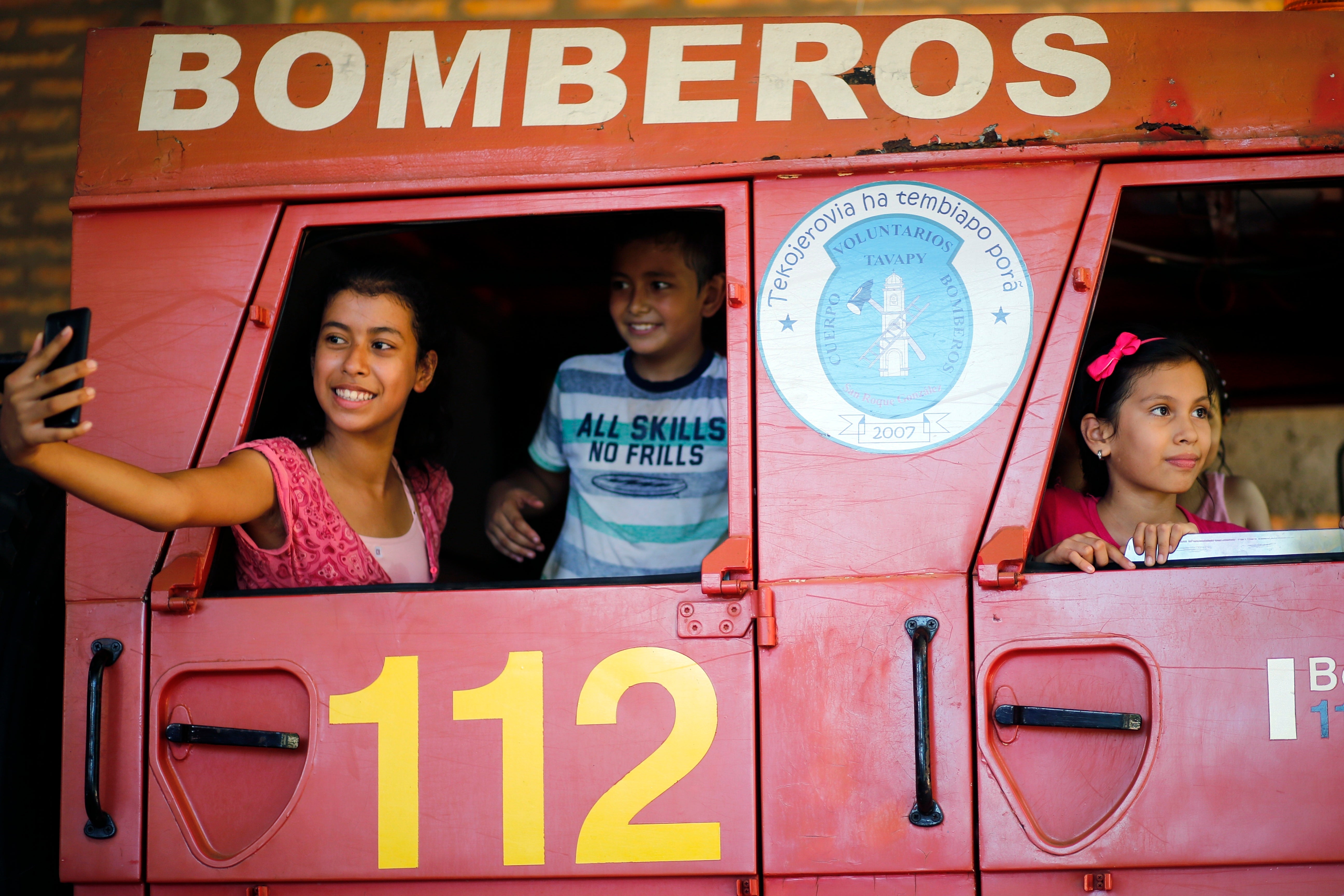 Sons and daughters of firefighters take selfies inside the fire truck during a visit to the station in San Roque Gonzalez, Paraguay. Other members of the department also juggle firefighting with jobs as teachers, journalists or plumbers, while some still attend nursing school or are finishing a law degree. (AP)