MANILA, Philippines — Politicians distributing giveaways is nothing new, but netizens couldn’t get enough of a viral post showing a rather unusual souvenir for constituents supposedly from a city councilor. 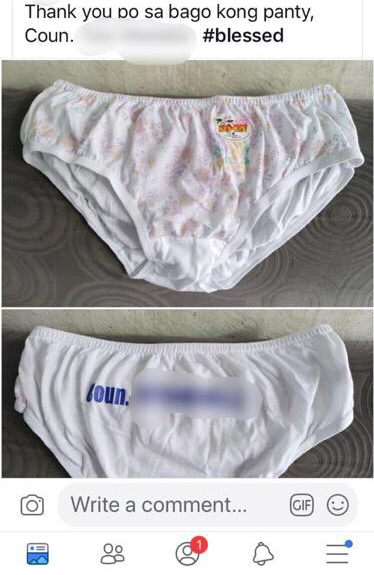 A netizen named Aica Abarabar shared photos of an underwear bearing the name of a local politician in a Facebook post on Tuesday. She captioned her post: “Thank you po sa bago kong panty. #blessed.”

“Inoffer ng friend ko sakin coz it’s not her size. To my surprise may print pala sya sa likod,” Abarabar told INQUIRER.net in a Facebook message on Wednesday.

Abarabar said she received more than 2,500 friend requests after posting the snapshot of the underwear.

“As much as I want to add them or answer all their messages, it will be exhausting for me. Hindi dahil sa ang dami but because of my condition. But of course, it feels great that I instantly became an instrument to make a lot of people happy,” she added.

Meanwhile, netizens were all amused about the extraordinary political keepsake that one of them wondered: “May pa-panty!! Wala ba tong ternong bra? Hahaha.”