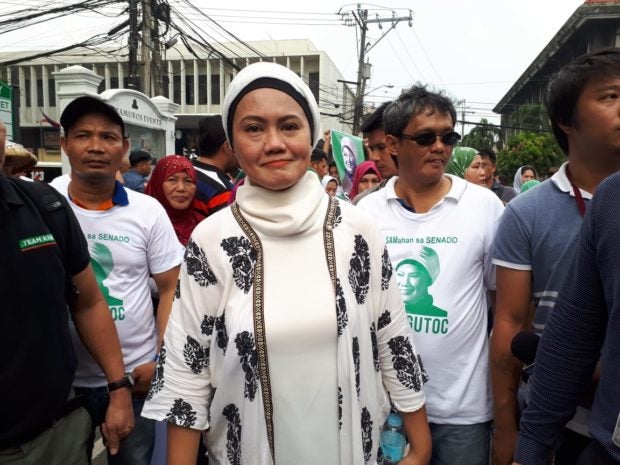 MANILA, Philippines — A Marawi civic leader has called on President Rodrigo Duterte to “cease and desist” from making remarks that “degrade women and put them in a precarious position” in the wake of the Chief Executive’s confession about touching a maid in his youth.

“Rape and sexual harassment jokes should have no place in our society. They corrupt the minds, especially of the youth, and degrade the status of women, especially when these utterances come from the highest leaders of the land,” Samira Gutoc said in a statement, Wednesday.

In a speech in Kidapawan City, Cotabato last Dec. 30, 2018, Duterte shared how he confessed to a priest for touching a maid twice in her private part while she was asleep.

Duterte said the priest of the Catholic school he was in at the time allegedly touched him too.

READ: Another joke? Duterte shares story of ‘touching’ a maid in his youth

Presidential Spokesperson Salvador Panelo defended Duterte, saying his confession was just a “laughable anecdote” the President intentionally made up to “dramatize the sexual abuse” he suffered from a priest when he was still a minor.

But Gutoc said this should not be taken lightly.

This was not the first time the President drew flak for his rape jokes. At the height of the election campaign in 2016, he joked about an Australian missionary who was raped in Davao City.

In July 2018, the President also joked that he would congratulate a rapist who could carry out the crime.

This, along with the declaration of martial law in Mindanao, prompted the resignation of Gutoc from the Bangsamoro Transition Commission.

“I feel strongly about this. I resigned because of a rape joke, and I will not stand to tolerate more. What these jokes do are expose our women, especially the OFWs, to undue danger because they are disrespected here.”

Gutoc, who is running for senator under the opposition slate, said she would propose laws that would strengthen the rights of women and domestic helpers in the country and abroad.

Recent studies have shown that there are over 10 million OFWs deployed all over the world, and many of them–as much as 740,000–work as domestic or household and office helpers, she noted.

“We remember that words uttered against women can be labeled as emotional violence. As a woman and a mother, this is unacceptable and demoralizing. I will never tolerate such treatment to women of any job or stature in society,” Gutoc added. /jpv