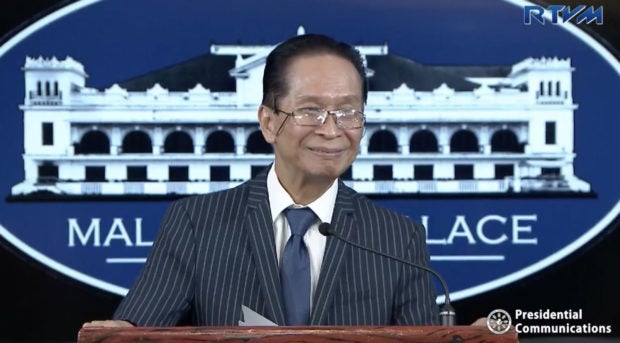 MANILA, Philippines — Malacañang on Sunday defended President Rodrigo Duterte’s confession that involves sexual abuse, calling it just a “laughable anecdote” the President intentionally made up to dramatize the sexual abuse he suffered from a priest when he was still a minor.

“In his inimitable allegorical style of dramatizing the sexual abuse the President suffered when he was a minor, he has made up a laughable anecdote to dramatize the fact of sexual abuse that was inflicted on him and his fellow students when they were in high school,” Presidential Spokesperson Salvador Panelo said in a statement.

Panelo insisted that Duterte just “purposely added and spliced the story with vulgarity to characterize the behavior of the priest who insisted to hear more sins during their confessions when there were none.”

The Palace official issued the statement after Duterte came under fire for sharing to the public the alleged “lewd” act he did to a maid when he was still young.

In a speech in Kidapawan City, Cotabato on Saturday, Duterte talked about the incident as he again criticized the Catholic church for supposed cases of sexual abuse committed by priests.

In his narration, Duterte said he went into a maid’s room while she was asleep and touched her in her private part. After touching the maid, he said he went to the bathroom to do the “usual.”

Duterte said he confessed this to a priest of the Catholic school he was attending, and the latter allegedly touched him too. The President had previously claimed to have been molested by a priest.

READ: Another joke? Duterte shares story of ‘touching’ a maid in his youth

“It is unfortunate that in its zeal to promote its advocacy on the protection of women’s rights as well as in its obsession to put the President in a bad light, the women’s rights group has lost the ability of discerning a reality from a rebuke on the hypocrisy of the priests who molested him and his classmates when they were high school students,” he said.

Duterte frequently drew criticism for his comments on women, including rape jokes and boasting about adultery.

Panelo said “the President has evolved an unorthodox and mischievous method of exposing and criticising the hypocritical practices of those men in religious cloak.”

“While the telling of the concocted story triggers laughter on his audience, the message that the President intends to convey is not lost on his listeners,” he added.

Panelo stressed that the President “will not discard his shocking and amusing out of the box utterances that have been his political signature.” /jpv