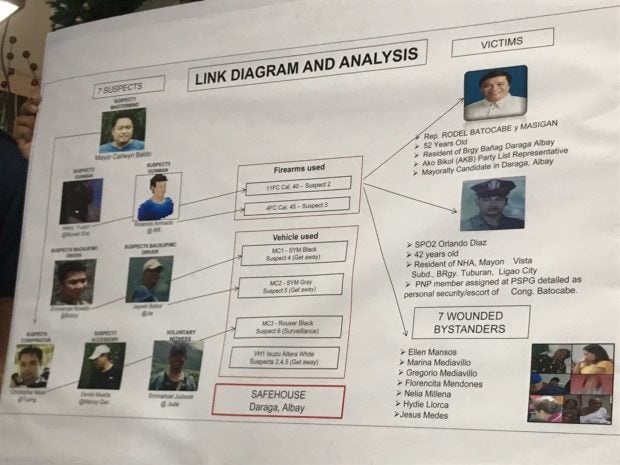 MANILA, Philippines — Mayor Carlwyn Baldo of Daraga, Albay has asserted his innocence, claiming that he did not order the killing of Ako Bicol partylist Rep. Rodel Batocabe and police aide SPO2 Orlando Diaz.

“I did not order the deaths of anyone. I did not kill Cong. Batocabe and SPO2 Diaz,” Baldo said on Thursday, hours after the Philippine National Police (PNP) filed cases of double murder and six counts of frustrated murder against him.

“Indeed, this is a sad, woeful day as a malicious and great power has single-handedly eclipsed justice and due process today. Daraga is still mourning the loss of two of its sons, and now it has one more reason to grieve—the death of truth and justice,” he added.

Baldo was pinpointed by the PNP as the mastermind in the assassination of Batocabe — who was on his last term as Ako Bicol representative.

Batocabe was one of the three candidates for mayoralty of Daraga in the May 2019 polls, including Baldo, who is seeking re-election, and Daraga Vice Mayor Victor Perete.

The local chief executive insists that he is innocent, and that the true killers of Batocabe are still free.

“I assert my innocence.  Let us not forget that while I am being used as a convenient scapegoat, those who are truly responsible for the crime remain free and blameless,” he said.

He also claimed that he is merely a fall-guy, because he was an “easy target” due to the upcoming electoral race.

“I am an easy target but that does not make me guilty of the crime. I am already being persecuted in the courts of public opinion.   A trial by media is being held in front of every screen, constantly on repeat since (PNP Chief Dir. Gen. Oscar) Albayalde’s statement was released this morning,” he noted.

“Neither of these are proof of my guilt. I did not order the deaths of anyone. I did not kill Cong. Batocabe and SPO2 Diaz,” he added.

Batocabe and Diaz were waiting outside a covered court after a charity event last December 22 when both were shot multiple times by six gunmen.  They were brought to a hospital but were eventually declared dead.

Initial investigation by the National Bureau of Investigation (NBI) released last December 23 said the killing of Batocabe was likely politically-motivated and related to the upcoming elections.

Batocabe’s wife also brushed aside talks that communist rebels were involved, saying that the New People’s Army and the Communist Party of the Philippines have nothing to gain from the lawmaker’s death.

However, Baldo clarified that his conscience is clear, even offering sympathies to the bereaved families.  Prior to this development, he had already said that he has nothing to do with the killings.

He also refrained from commenting on the case against him.

“Sa ngayon po, na hindi ko pa nababasa ang akusasyon laban sa akin, hindi pa ako puwedeng magsalita sa lahat ng katanungan ninyo.  Upon the advise of my legal counsel, I will refrain from further discussing this matter until we have properly and formally received our copy of the complaint,” he added. /je

Batocabe widow: I am being asked to run in my husband’s place