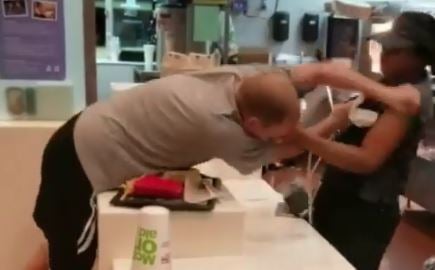 One man from St. Petersburg, Florida in the United States was recently captured assaulting a McDonald’s employee. The reason behind his outburst? A straw.

The video was recorded by Kinie Biandudi, a witness of the incident, and was shared all over social media by her brother TJ on Dec. 31. In the video, the man, identified by reports as Daniel Taylor, can be seen putting his hands on the employee, Yasmine James, who was standing behind the counter.

“My mom and sis Kinie Biandudi recorded this today… All started because he wanted a straw,” he wrote on Facebook.

In the video, Taylor forcefully grabs James by her shirt’s collar and pulls her towards him on the counter. James retaliates and defends herself by hitting him back before being pried away by fellow employees. In the end, Taylor can be heard demanding for a refund.

Taylor apparently walked to the counter to get a straw, but started screaming at the employees when he could not find any, as per ABC Action News on Jan. 2.

“He was yelling and walking toward the counter and the young lady behind the counter told him that it’s the law now that we’re not allowed to have straws in the lobby,” Biandudi was quoted as saying.

As per the report, the law took effect just last Jan. 1 and prohibits restaurants from having straws available in the open in the hopes of completely banning them by 2020. Customers must instead ask for straws should they want one.

Meanwhile, Biandudi also took to her Facebook on Jan. 2 to share that James was not fired by McDonald’s.

“The young girl said she used to box,” she wrote. “After this fight he came back and went behind the counter and tried to fight the manager. The guy left before the cops arrived.”

It was reported that Taylor also tried to kick another employee on the stomach while on his way out of the restaurant. He was eventually arrested and charged with two counts of simple battery. Cody Cepeda/JB