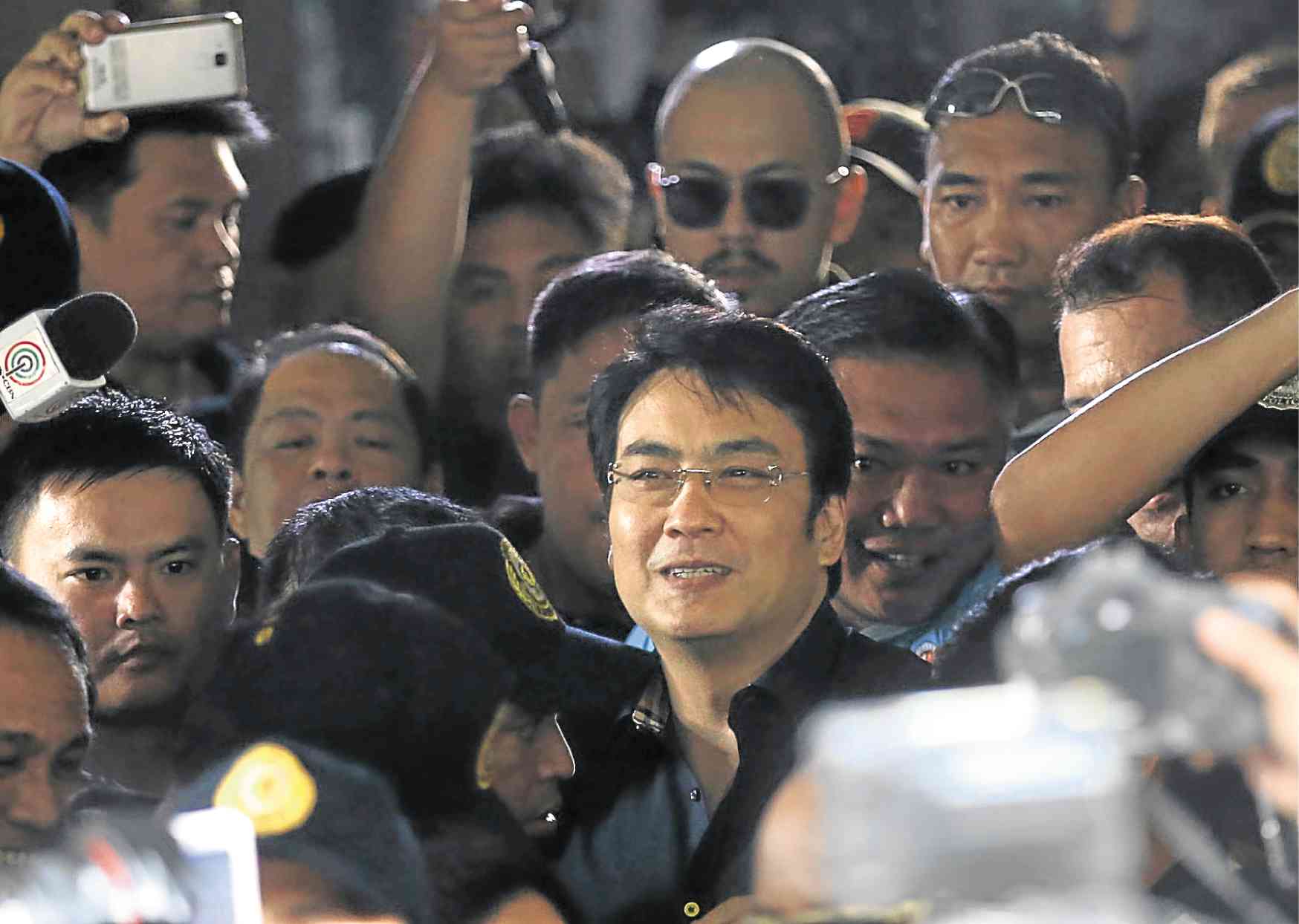 MANILA, Philippines — Since its creation in 1973, the Sandiganbayan has handled a lot of controversial cases, largely because of its nature as a court hearing cases on anomalous government transactions.

This year has been no exception — especially in the last few months of 2018 — after two high-profile cases were decided upon by the anti-graft court.

More than 27 years after the cases were filed, and 32 years since her family went into self-exile, former First Lady and incumbent Ilocos Norte 2nd District Rep. Imelda Marcos was convicted of seven counts of graft cases.

On November 9, the Sandiganbayan Fifth Division decided that Marcos — who was absent during the promulgation of her cases — was guilty of violating R.A. 3019 or the Anti-Graft and Corrupt Practices Act when she funneled funds to seven Swiss foundations while she was a member of the Batasang Pambansa, governor of Metro Manila, and as minister of Human Settlements.

According to the Sandiganbayan decision, Mrs. Marcos and her late husband former President Ferdinand Marcos set up the Swiss foundations and three other local entities using the pseudonym Jane Ryan and William Saunders for their own family’s benefit and not for charity.

“Ms. Marcos argued as a defense in her Memorandum that, what is prohibited under Article IX, Section 8 (of the 1973 Constitution) is to ‘participate in the management of any business,’” the Sandiganbayan noted in the decision.

“The court is not convinced.  A ‘business’ is generally defined as the activity of making one’s living or making money by producing or buying and selling goods or services.  Simply put, it is any activity or enterprise entered into for profit,” it added.

A week later, Mrs. Marcos appeared before the Court to explain her absence and post a new bail of P150,000. At the witness stand, Mrs. Marcos was quizzed by Fifth Division Chairperson Associate Justice Rafael Lagos on why she and her counsel lawyer Robert Sison skipped the promulgation.

She explained that Sison was sick, thus was unable to inform her of the proceedings, claiming that she would have attended the promulgation had she known of its schedule.

Aside from that, Mrs. Marcos cited seven ailments which prompted her doctor to advise her against attending stressful occasions to avoid “heart and brain attack and recurrence of seizure.”

Despite the medical findings, Marcos was seen attending a party in San Juan just hours after the Sandiganbayan handed out the guilty verdict against her.  She stated that it was only due to the request of her daughter, Ilocos Norte Governor Imee Marcos who celebrated her birthday.

She was sentenced to serve jail time of six years and one month up to 11 years for each count.  Weeks after, the Sandiganbayan allowed her to post bail again, worth P300,000, in consideration of her old age and while her motion was being heard at the Supreme Court.

Several netizens expressed delight on the decision against Mrs. Marcos, although some were disappointed that the Sandiganbayan allowed her to enjoy temporary liberty.

But if some rejoiced at Marcos’ conviction, people were outraged by the Special First Division’s decision on former Senator Bong Revilla’s plunder charges.

On December 7, the anti-graft court acquitted Revilla of plunder arising from the pork barrel scam because the prosecution failed to prove his guilt.  On the other hand, co-accused lawyer Richard Cambe, Revilla’s aide; and mastermind Janet Lim-Napoles were convicted.

Both Napoles and Cambe were sentenced to 40 years in jail and were perpetually disqualified from holding public office.

Revilla was accused of pocketing kickbacks when he allocated P224 million of his pork barrel or the Priority Development Assistance Fund (PDAF) to bogus non-government organizations (NGO) owned by Napoles.

Sandiganbayan cannot find any proof that Revilla was either directly involved in the scam, or that he guided Cambe in the scheme.  Furthermore, Revilla’s signature was supposedly forged by Napoles’ assistant, state witness Benhur Luy, according to employees of Napoles.

After the favorable decision, Revilla posted bail for 16 other counts of graft — a bailable case — so he can be free again.  Later that day, he was released from the Philippine National Police (PNP) Custodial Center in Camp Crame, which has been his home for the last four years.

Revilla’s case is the first pork barrel case to be resolved.

Revilla’s acquittal: How it went by

Why the gov’t’s plunder case vs Revilla was lost

Aside from these two cases, here are some of the cases which the Sandiganbayan decided on:

Echiverri was acquitted of four graft charges just this December, in relation to a walkway and drainage project without the nod of Caloocan City Council.  His acquittal brought down the number of cases filed against him by the Office of the Ombudsman to 53.

The number could slide down even more if the First Division approves the prosecution’s request to withdraw the four cases against Echiverri.

In December, Gigi Reyes — the chief of staff of former Senator Juan Ponce Enrile who is also allegedly involved in the pork barrel scam — sought bail once again.  The Sandiganbayan Special Third Division denied it anew.

According to the resolution, the evidence presented by the prosecution negated Reyes’ claims that she was not directly involved in the case.

Another co-accused in the pork barrel scam, former Senator Jinggoy Estrada, was allowed by the Sandiganbayan Fifth Division to travel on two separate occasions.

In October, Estrada traveled to Singapore to accompany his ailing mother, former Senator and former First Lady Loi Estrada, for a medical check-up.  This was followed by a trip to Hong Kong with his family, from December 26 to 31, for the holidays.

This was in connection with complaints that Paulate had 30 ghost employees in his office last 2010.

Former Gov. Jesus Typoco Jr. was convicted after he ‘illegally’ acquired 7,219 pieces of steel and wooden armchairs, 180 sets of plant cultivation implements and fertilizers, and 100 garden site and soil preparation from Crown IBM Trading in Batangas City in 2001.