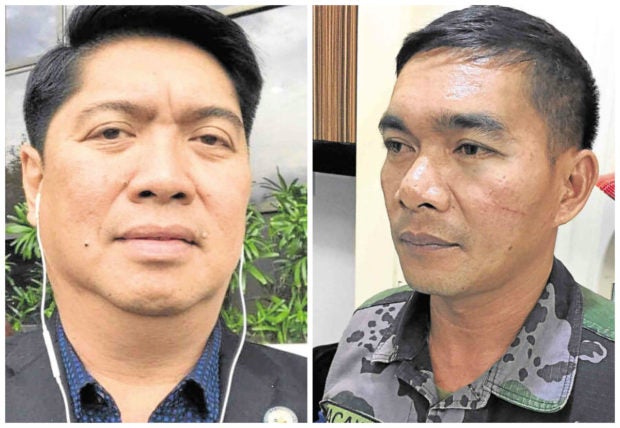 Iloilo Rep. Oscar Garin Jr. (left) has apologized but tried to justify his actions against PO3 Federico Macaya Jr. (right), who allegedly persuaded a young man not to file a criminal complaint against another man who had attacked him.

The administrative complaints include grave misconduct, conduct unbecoming, oppression, abuse of authority and conduct prejudicial to the best interest of the public, he said.

PNP Director General Oscar Albayalde, meanwhile, ordered the cancellation of the firearm licenses of the Garins, who owned between them a total of 19 guns, and the relief of the entire Guimbal police force, including the police chief, who did not defend the officer.

“The President himself was so disappointed and I will ensure that his orders to file cases against the Garins will be complied with [as soon as possible],” Año said.

After the unprovoked assault by the congressman, Macaya Jr., 41, was left with a black eye, a swollen face and a cut on his left cheek.

Macaya, a father of two, has been in the service for 13 years and was assigned in Guimbal only 10 months ago.

Garin alleged that Macaya persuaded a young man not to file a physical assault complaint against another man in a Dec. 22 incident at the town plaza.

He and his father, a former congressman, told the town’s police chief, Senior Insp. Antonio Monreal, to summon Macaya.

The officer told investigators that when he arrived around 3:30 a.m. on Wednesday at the plaza, he was disarmed by Monreal and handcuffed by Garin.

As he squatted with a leg between his arms, Macaya said the lawmaker began berating and kicking him. Garin, who was armed, fired a shot into the air and spat twice on his face.

He said Garin’s father also castigated him while pointing a gun at him as he was being beaten up by the lawmaker. Several of the Garins’ bodyguards were standing nearby, he said.

The abuse continued for about 45 minutes before two police officials called Garin to intervene.

Macaya told the Inquirer on Thursday he pleaded with the congressman to stop and to just file a complaint against him.

He said the Garins ignored his explanation that the young man decided not to file a complaint for fear that that would alarm his mother, who was working abroad.

Before assaulting Macaya, Garin ordered one of his bodyguards to shut down the closed-circuit television cameras in the area, Macaya said.

Garin apologized but insisted that Macaya committed “a betrayal of public trust and a clear abuse of his position.”

He said in a statement that he was not against the PNP “as an institution, or against its officers and personnel.”

“My actions were a mere display of extreme frustration toward one, single PNP [officer] whom I perceived had committed a great disservice to the people of Guimbal,” Garin said.

But his apology did not mollify police officials.

“Apology is accepted. But the cases we will file against him will proceed,” said Chief Supt. John Bulalacao, Western Visayas police director.

“There’s no reason for anyone to be abusive and arrogant, especially victimizing our policemen who are supposed to be accorded with due respect,” he said.

Año said the Garins’ “display of arrogance” was not expected of elected officials, adding that Mayor Garin’s actions were a “clear ground” for the possible removal of the official’s control and supervision over the local police.

Tayaba sacked Monreal for “allowing the attack on the policeman in front of him.”

The rest of Guimbal’s 29-member police force also was relieved “after majority signified that they do not want to be assigned in Guimbal,” Tayaba said.

Garin, a former vice governor of Iloilo, is the husband of former Health Secretary Janette Garin, who is running to replace him in the May 2019 elections.