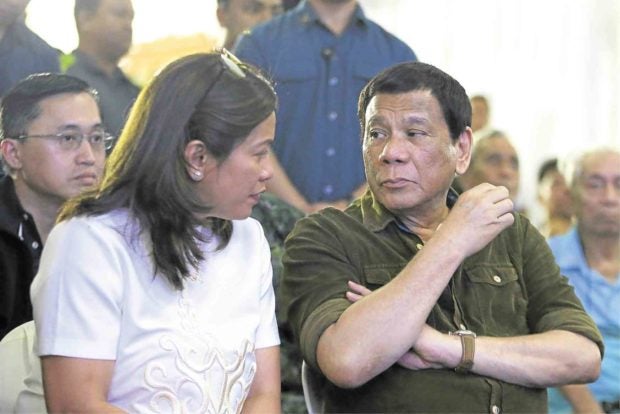 DARAGA, ALBAY—President Duterte has recommended to the Commission on Elections (Comelec) to put the town of Daraga in Albay province under its control, after the assassination last week of Ako Bicol Rep. Rodel Batocabe.

The local field office of the Comelec has made the same recommendation, out of fears of an eruption of violence after the killing of Batocabe on Saturday and of two other people the next day, according to Comelec spokesperson James Jimenez.

President Duterte traveled to Daraga on Wednesday night to visit the wake of Batocabe, who was shot multiple times by up to six men as he and his police bodyguard, PO1 Orlando Diaz, were leaving a Christmas event for senior citizens at Barangay Burgos on Saturday afternoon.

Diaz was also killed in the attack.

Mr. Duterte told reporters that he had talked with the widow and sons of Batocabe and that they had asked for justice.

He said he called Comelec Chair Sheriff Abas and recommended to him to place Daraga under Comelec control.

“I said let us go back to [the] Alunan doctrine that no candidate should strut around with bodyguards with long firearms. That is prohibited. Only the police and the military [can],” Mr. Duterte said, referring to the crackdown on armed bodyguards of politicians launched by Interior Secretary Rafael Alunan during the Ramos administration.

Under Comelec rules, the election watchdog can take control of any part of the country where there is intense political rivalry, presence of paramilitary forces or that has a history of election irregularities.

Once it has placed a city or town under its control, the Comelec exercises direct supervision over all local and national officials there.

It also takes direct supervision over all law enforcement agencies in the area.

Jimenez said the full commission would consider the recommendation, along with the security assessment of Daraga by the Philippine National Police.

Should the commission approve the recommendation, he said, Daraga will be placed under Comelec control on Jan. 19, 2019, the start of the local election period.

Batocabe had planned to run for mayor of Daraga. Local officials and his family said he had received death threats after a local poll had shown that he was at the head of the field in the mayoral race.

Relatives and supporters point to politics as the motive for the killing of Batocabe, but police, though not discounting politics, are looking at the possibility of a hit by the communist New People’s Army (NPA).

The National Democractic Front of the Philippines, the umbrella group of the local communist movement, has denied NPA involvement in the attack on Batocabe.

The PNP, however, says it is possible NPA guerrillas are doubling as hit men and working for politicians.

PNP Director General Oscar Albayalde said on Wednesday that investigators had six persons of interest in the killing of Batocabe, but gave no details.

Albayalde also said the authorities had no evidence yet against the local official suspected of ordering the killing of Batocabe.

He said, however, that the official was not yet off the hook.

Feeling alluded to, Daraga Mayor Carlwyn Baldo on Thursday appealed to the public for “sobriety and circumspection.”

“Let us avoid trial by publicity and wait for the final results of the ongoing investigation,” Baldo said in a post on Facebook.

The Ako Bicol party-list group is offering a reward of P30 million for information that could lead to the identification and arrest of the perpetrators.

President Duterte said he was throwing in P20 million to raise the bounty to P50 million.

He said people who had information would not need to identify themselves.

Mr. Duterte suggested that they buy a cheap cell phone and send the information.

“When the time comes, if many will claim, just show [your phone],” he said.

Mr. Duterte was unable to go to the wake of Diaz in Ligao City, but Albayalde went there on Wednesday and handed the PNP Medal of Heroism to the slain officer’s widow.

The President, however, promised to take care of the education of Diaz’s children and build a house for the family if they did not have a house of their own.

Mr. Duterte said he was confident the case would be solved, as the investigators had strong leads.

“The leads are very strong. The link is not a warped one. It is almost straight,” he said, without elaborating.

Mr. Duterte also warned politicians who employed violence to keep themselves in office.

“Killing is a remedy for them to erase their opponents. Let me just say, I promised the Filipino people, my country, that I will not allow political terrorism, oppression and intimidation,” he said.

Mr. Duterte said he had been told that local residents knew who ordered the killing of Batocabe.

“I also have my reasons to suspect the guy,” the President said.

Mr. Duterte said he would return to confront the mastermind. 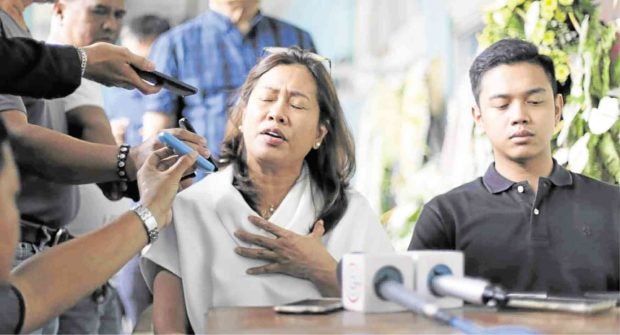 Batocabe’s widow, Gertrudes Duran-Batocabe, said the President had asked her to run for mayor of Daraga in her husband’s place, but she had not made a decision.

“[M]y focus right now is to bury him (her husband) with dignity and honor, in accordance with how he lived his life. And after this, justice,” she said.

Mr. Duterte warned Batocabe’s killers not to touch whoever would run in place of the congressman or an “accident” would befall the mastermind. —WITH REPORTS FROM JOVIC YEE AND GEORGE GIO BRONDIAL