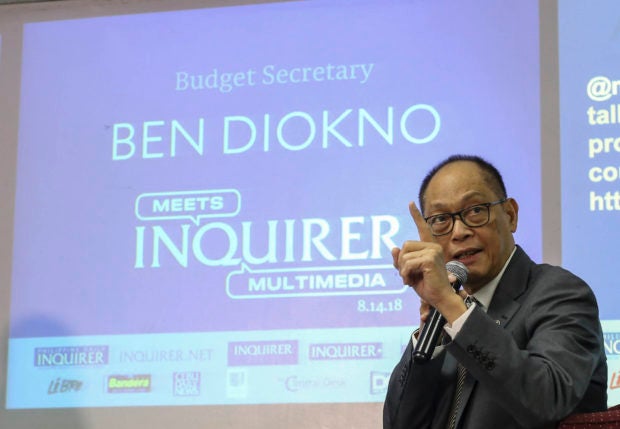 MANILA, Philippines — The accusations of some lawmakers that he is the one behind the alleged “insertion” in the proposed 2019 budget is a mere diversion from the “pork barrel” issue, Budget Secretary Benjamin Diokno said Tuesday.

Diokno made the remark as he again stressed that what he did was just an “adjustment” during the budgetary process.

“They’re trying to divert the attention from the ‘pork barrel’ that Senator Ping (Lacson) noticed in the submission of the House to the Senate,” Diokno told CNN Philippines’ The Source.

“The role of the House is to prepare the GAB, General Approriations Bill. That’s where he (Lacson) noticed the discrepancy between the President’s budget and the GAB… They’re trying to divert the attention, muddle the issue,” he added.

Lacson earlier disclosed that the lion’s share of the “insertions” in the budget were allocated to certain House members, among them were House Speaker Arroyo, who received P2.4 billion worth of projects, and House Majority Leader Rolando Andaya, who got P1.9 billion.

Andaya, however, said that top honchos in the previous House leadership receive multi-billion worth of allocations in the proposed P3.757-trillion national budget for 2019.

Diokno also said that the same “adjustment” happened in preparing the 2017 national budget when he allocated more funding to the Department of Education, which is mandated to receive the highest priority in the GAB.

“That is not an insertion. We made an adjustment ganun din ang nangyari noong 2017 kasi under the Constitution, Education should get the highest priority. Nung tiningnan ko yung Education budget it’s still lacking so I added more money for school buildings,” he said.

The House of Representatives transmitted the 2019 General Appropriations Bill behind schedule.

The Senate, however, almost completed tackling the budgets of various agencies except for a some major departments like the Department of Tourism and the Department of Public Works and Highways (DPWH), whose budgets have been questioned for the alleged “insertion” of P75 billion.

Lawmakers have blamed Diokno for allegedly failing to explain the allocation for the DPWH. /cbb