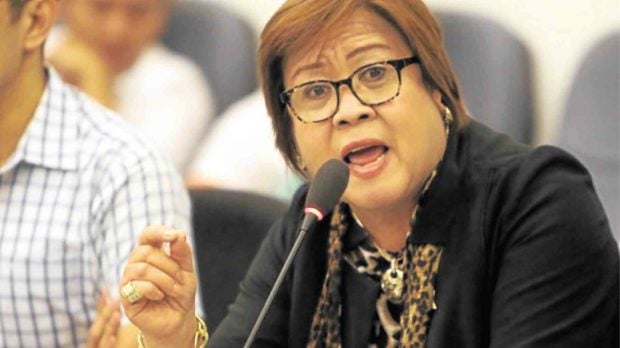 MANILA, Philippines–Opposition Senator Leila de Lima on Tuesday lauded Rappler president Maria Ressa for being named as one of the 2018 “Persons of the Year” by TIME Magazine along with other journalists.

De Lima said that the recognition of Ressa, whom she called as the “People’s Champ,” has brought honor and pride to Filipinos, saying that Filipino people would realize the “debt it owes to every single honest-to-goodness journalist.”

“Someday the Filipino people will realize the debt it owes to every single honest-to-goodness journalist, who perseveres in bringing the truth to the people, even at great personal expense,” De Lima said in a dispatch from Camp Crame.

“She is not doing it for glory or for money.  She does it simply because the Filipinos deserve to know the truth,” she added.

Aside from Ressa, the magazine also chose slain Saudi journalist Jamal Khashoggi, jailed Burmese journalists Wa Lone and Kyaw Soe Oo of Reuters and the staff of the Capital Gazette in Annapolis, Maryland, which lost five of its staff in an attack last June.

TIME Magazine recognized the journalists as its 2018 Person of the Year in what it said was an effort to emphasize the importance of reporters’ work in an increasingly hostile world.

TIME collectively called the four figures as “the guardians,” who are “taking great risks in pursuit of greater truths, for the imperfect but essential quest for facts, for speaking up and for speaking out.”

The detained senator described the “guardians” as heroes who “wield powerful weapons in the form of their words and their endless commitment to truth.”

“They face the scariest of villains for they are the most dangerous enemies of the public: the politically and economically powerful, who choose to wield their power and influence to subjugate the rest of humanity to further their own, already well-padded, interests,” De Lima said.

TIME Magazine recognized journalists, including the slain Saudi columnist Jamal Khashoggi, as its 2018 Person of the Year in what it said was an effort to emphasize the importance of reporters’ work in an increasingly hostile world.

De Lima also noted the parallelism of Ressa with the Reuters journalists who exposed the slaughter of Rohingya people and have been imprisoned or criminally charged for what she said are “trumped-up charges that are intended to neutralize them.”

Ressa, who co-founded the online news site Rappler in 2012, has been an outspoken critic of the Duterte administration. She and her company face tax evasion cases filed by the Department of Justice. /jpv