Ressa, Khashoggi, other journalists named Time Person of the Year

NEW YORK — Time Magazine on Tuesday recognized journalists, including the slain Saudi columnist Jamal Khashoggi, as its 2018 Person of the Year in what it said was an effort to emphasize the importance of reporters’ work in an increasingly hostile world.

The designation wasn’t intended as a specific message to the magazine’s runner-up choice, President Donald Trump, who has denounced “fake news” and called some reporters enemies of the people, said Ben Goldberger, executive editor.

Time cited four figures it called “the guardians.” Besides Khashoggi, they are the staff of the Capital Gazette in Annapolis, Maryland, where five people were shot to death in June; Philippine journalist Maria Ressa; and Reuters reporters Wa Lone and Kyaw Soe Oo, who have been jailed in Myanmar for a year.

It’s the first time since the magazine began the end-of-year tradition in 1927 that Time has featured a journalist or recognized someone posthumously. 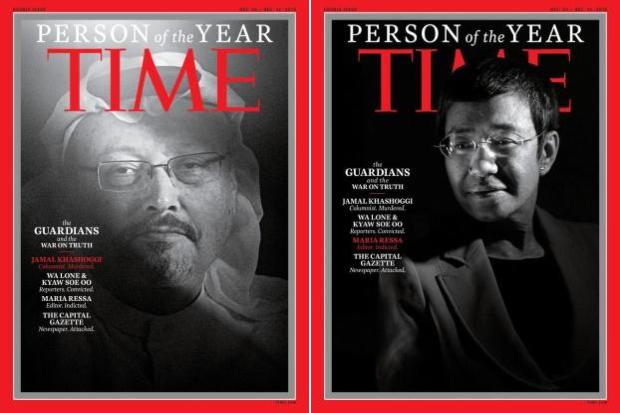 This combination photo shows Time covers for the Person of the Year: Jamal Khashoggi, left, and Maria Ressa. (Photo courtesy of Time)

Time said that 2018 has been marked by manipulation and abuse of information, along with efforts by governments to foment mistrust of the facts.

Goldberger said the magazine hopes the choice reminds people outside of journalism about the importance of the work.

Joel Simon, executive director of the Committee to Protect Journalists, said he sees this message already starting to get through — sadly, in part because of the attention paid to Khashoggi’s killing. Khashoggi is one of at least 52 journalists murdered so far this year, the committee said.

“In some ways, I feel we’re at a turning point,” Simon said.

Khashoggi was killed two months ago when The Washington Post columnist, who had lived in the U.S., visited Saudi Arabia’s consulate in Turkey for paperwork so he could get married. He had been critical of the Saudi regime.

The Washington Post applauded Time for its message of support for journalists.

“We hope this recognition will prompt our nation’s leaders to stand up for America’s values and hold accountable those who attempt to silence journalists who cover our communities or in Jamal’s case, an oppressive authoritarian government,” said Fred Ryan, the Post’s publisher and CEO.

Reesa co-founded the online site the Rappler, which has aggressively covered the government of Philippines President Rodrigo Duterte. She was recently charged with tax fraud, with many in the Philippines seeing that as a reaction to the Rappler’s reporting.

Wa Lone and Kyaw Soe Oo were imprisoned after investigating a massacre of Rohingya Muslims.

Four journalists and a sales assistant were killed by a gunman at the Capital Gazette newspaper last spring. 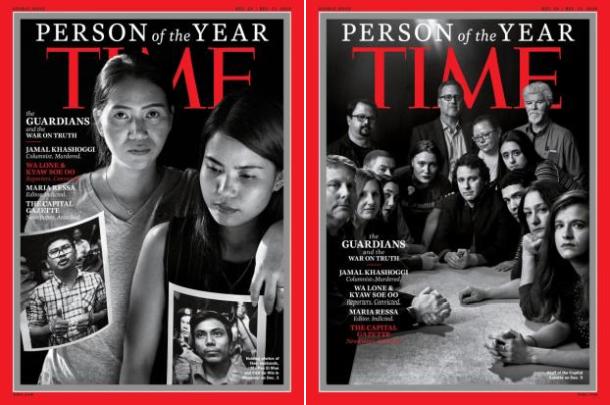 This combination photo shows Time covers for the Person of the Year: Wa Lone and Kyaw Soe Oo, left, and members of the Capital Gazette newspaper. ((Photo courtest of Time)

Last year Time recognized people who came forward to report on sexual misconduct. Trump, this year’s runner-up, was Person of the Year in 2016.

The third-place finisher this year was special counsel Robert Mueller, who Time indicated could move up in next year’s rankings depending on the findings of his investigation into the Trump campaign’s contacts with Russia. /atm