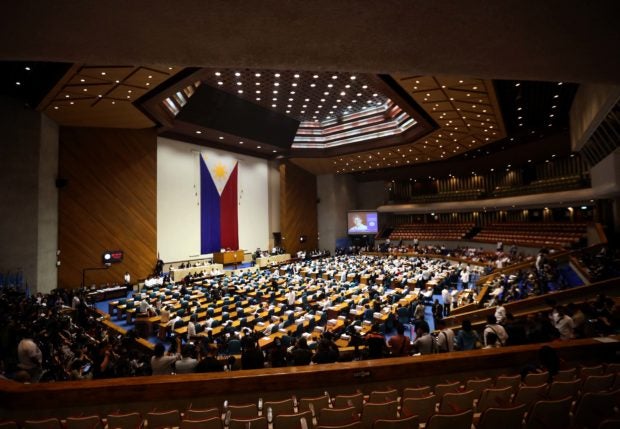 Joint session of Congress and Senate on the extension of Martial Law in Mindanao on Dec. 13, 2017.
INQUIRER PHOTO/LYN RILLON

MANILA, Philippines —  For the third time, Congress gave its nod on Wednesday to President Rodrigo Duterte’s request to extend martial law in Mindanao for another year, a move the Chief Executive said would “put an end to the on-going rebellion in Mindanao.”

A total of 12 senators voted to extend martial rule in Mindanao until Dec. 31, 2019. Five were against and one abstained.

On the part of the House, 223 voted to extend, 23 were against, with no abstentions.

With a final total vote of 235 for an extension, 28 against and one abstention, Congress voted to extend martial rule in the South.

The outcome came after about three hours of debates in a joint session at the Batasang Pambansa Complex in Quezon City.

He argued the extension would enable the Armed Forces of the Philippines, the Philippine National Police and other law enforcement agencies “to finally put an end to the on-going rebellion in Mindanao and continue to prevent the same from escalating in other parts of the country.”

Duterte first declared martial law in Mindanao on May 23, 2017, after the Islamic State-inspired Maute terrorist group attacked Marawi City. He asked Congress for its extension until December of the same year.

The President later requested its extension until the end of 2018 despite the government’s declaration of an end to fierce urban fighting in the war-torn area.

Article VII Section 18 of the Constitution states that if there is “invasion or rebellion, when the public safety requires it,” the President may suspend the privilege of the writ of habeas corpus or place the Philippines or any part of it under martial law for not more than 60 days.

However, Congress, voting jointly, by a vote of at least a majority of all its members, may extend it upon the initiative of the President. The legislative branch may also choose to revoke such in the same manner. /cbb