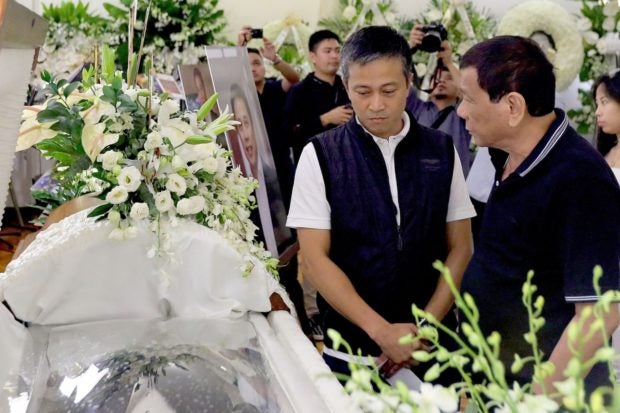 President Rodrigo Duterte pays his last respects to Dominic Sytin, during his visit at the wake of the late businessman and philantropist at the Heritage Memorial Park in Taguig City on Dec. 2, 2018. Also in the photo is the late businessman’s brother Rommel. (photo by VALERIE ESCALERA / Presidential Photographers Division)

Twenty-one out of 23 senators on Monday urged the Philippine National Police (PNP) to quickly resolve the “brutal and senseless” killing of businessman Dominic Sytin and hold the perpetrators accountable.

In filing Senate Resolution No. 962, the senators condemned “in the strongest sense” the killing of Sytin and called on the PNP and other law enforcement agencies “to use the full force of the law to bring justice” to the slain businessman as well as the “other victims of similar heinous crimes” to address the “culture of impunity” in the country.

Many demanded the swift arrest of the killer.