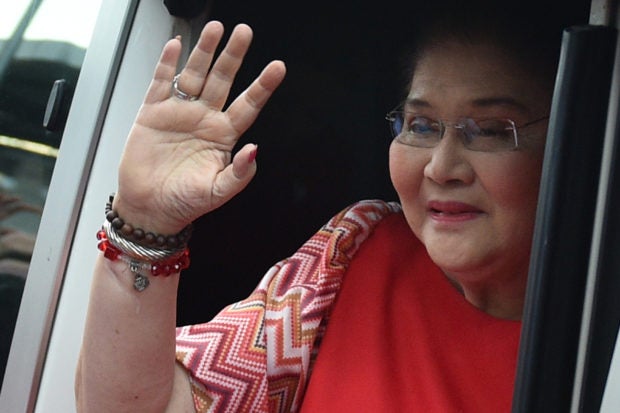 This photo, taken on May 5, 2016, shows former first lady Imelda Marcos waving to the crowd as she arrives for her son vice presidential candidate Ferdinand Marcos Jr.’s “miting-de-avance” in Manila. Imelda Marcos was found guilty of corruption on Nov. 9, 2018 and ordered arrested in a rare conviction for the former Philippine first lady accused with her late dictator husband of embezzling billions of dollars from state coffers. (Photo by TED ALJIBE / AFP)

The Sandiganbayan on Friday allowed former First Lady Imelda Marcos to post P150,000-bail and enjoy temporary liberty while the court decides on her motion for leave despite the anti-graft court’s decision convicting her on seven cases of graft.

The sum of bail bond was the same amount Mrs. Marcos originally posted in 1991, but was forfeited upon her conviction last Nov. 9.

While the anti-graft court resolves her motion for leave, the widow of the late dictator Ferdinand E. Marcos was ordered to stay inside the premises of the Sandiganbayan Fifth Division’s court room.

On Monday, Mrs. Marcos filed a motion for leave to avail of post-conviction remedies. She also cited in that motion that she was unable to attend the November 9-promulgation hearing because she was “indisposed” and has “multiple organ infirmities.”

But Mrs. Marcos attended the birthday party of her daughter Imee hours after the anti-graft court handed down its ruling.

Mrs. Marcos was found guilty for seven counts of graft in connection with the transfer of around $200 million to Swiss foundations, which she created with her husband and had their children among its beneficiaries.