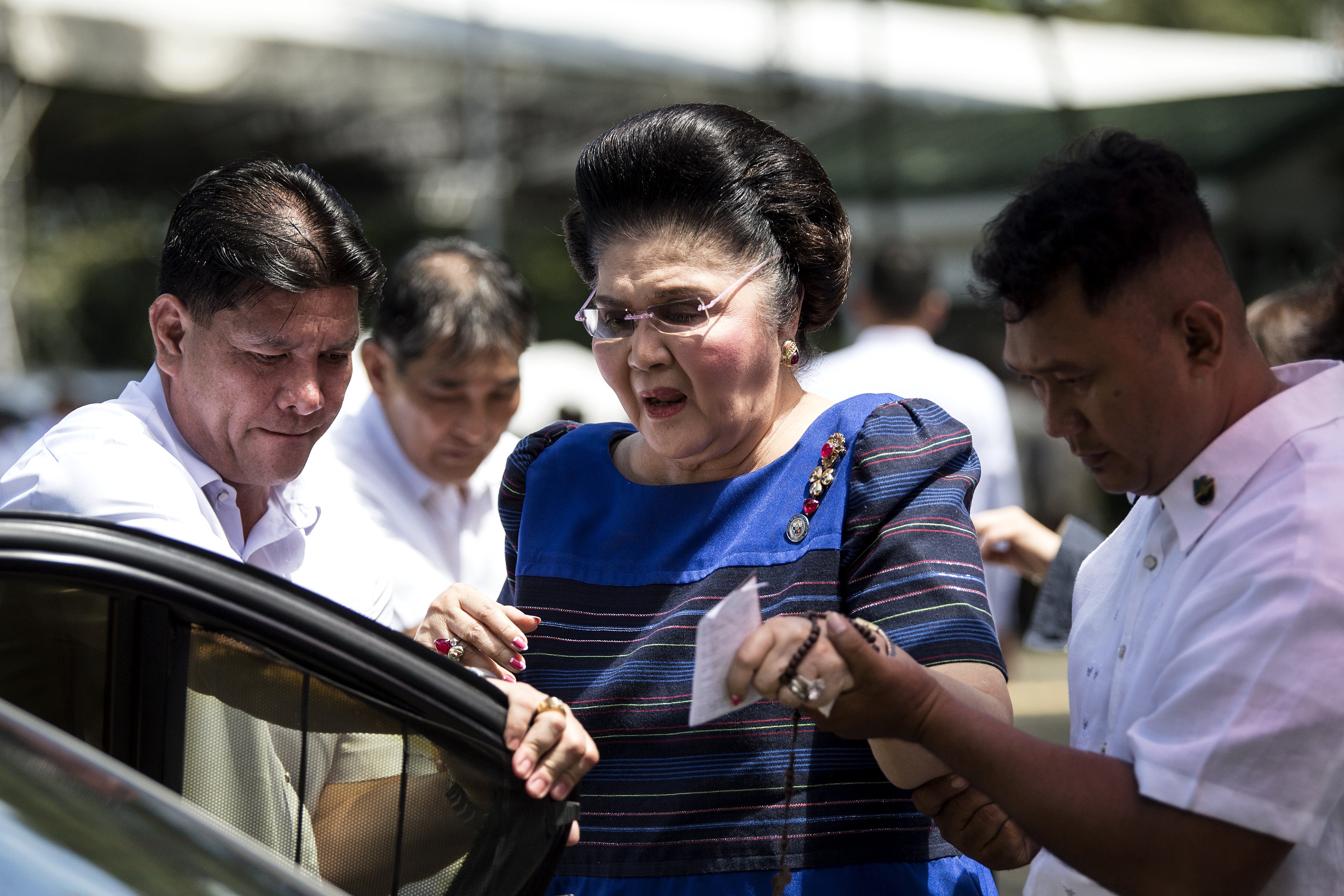 Cautious jubilation greeted the Sandiganbayan’s verdict on Friday finding former first lady Imelda Marcos guilty of graft and sentencing her to a maximum of 77 years in prison nearly three decades after the charges were filed against her.

Opponents of the Marcos dictatorship welcomed the decision but they also expressed doubts the ruling could be carried out under the Duterte administration.

In handing down its judgment, the antigraft court also ordered the arrest of the 89-year-old widow of dictator Ferdinand Marcos but allowed her to post bail of a still unspecified amount. She was also told to explain to the court in 30 days why she was absent when it announced its judgment.

The court ruled she was guilty in seven of the 10 graft cases filed against her from 1991 to 1995 in connection with Swiss foundations she and her husband established and used to stash at least $200 million abroad while she was a member of the defunct Batasang Pambansa, Metro Manila governor and minister of human settlements.

The Ilocos Norte representative was sentenced to serve six to 11 years in prison for each count.

Her conviction could still be appealed. If it is affirmed by a higher court, she will be perpetually barred from public office, which would be highly unlikely before the May 2019 polls where she has registered to run to replace her daughter, Imee Marcos, as governor of Ilocos Norte province.

In a statement released by her office, Marcos said her lawyer “intends to file a motion for reconsideration.”

In a statement, the group Campaign Against the Return of the Marcoses and Martial Law (Carmma) said “partial justice appeared to have been won by the Filipino people against plunderers.”

“While Carmma, together with the Marcos’ victims during their infamous reign of terror and plunder, rejoice at this guilty judgment against Imelda Marcos, we commit to continue pressing on to pursue the struggle for justice, and fight against tyranny and end impunity,” it added.

Human rights group Karapatan also hailed the verdict but was skeptical that Marcos would serve jail time, citing two reasons: “1) the current regime’s coddling and political rehabilitation of the Marcoses and 2) the machinations of the Marcoses to evade accountability.”

“We lament that it had to take 32 long years since the ouster of Marcos to attain such a ruling under the Philippine justice system,” Karapatan said.

Assistant Special Prosecutor Ryan Quilala said despite Marcos’ acquittal in the three other cases, “this is still a victory” after a protracted legal battle that began “when I was not yet a lawyer.”

The Supreme Court in 2003 determined that the dictator and his wife together only had a lawful income equivalent to $304,000 from 1966 to 1986, but their Swiss bank accounts held about $680 million.

The Presidential Commission on Good Government has recovered P170.45 billion of the estimated $5 billion to $10 billion in alleged ill-gotten wealth plundered by the Marcoses.

Presidential spokesperson Salvador Panelo said the verdict “underscores that our country currently has a working and impartial justice system that favors no one.”

He said the ruling was a “good reminder to all public servants that public office is a public trust,” adding that the Duterte administration respected the court’s decision and would not interfere with or influence a coequal branch of government.

“A longstanding prayer of the people has been answered. But then again it will be safe to say that with the Duterte administration’s close affinity with the Marcoses, Imelda will be pardoned unconditionally,” said BMP chair Leody de Guzman.

“Activists and progressives would be nabbed right away and evidence would even be planted against them or they would be killed, but authorities treated powerful people like the Marcoses like babies,” he said.

But at the Supreme Court, “friends of Digong (President Duterte) can still reverse the decision,” Sison told the Inquirer in an interview from Utrecht, the Netherlands, where he lives in exile.

ACT Teachers Rep. Antonio Tinio said it could be argued that “the decision was too little, too late.”

“The Marcoses may be able to temporarily evade accountability, they may be able, for the moment, to cheat history and whitewash their crimes with the use of ‘alternative facts’ and fake news, they may climb their way back to power and even hide behind the back of President Rodrigo Duterte, but justice will eventually push its way through their walls of impunity,” she said.

Sen. Francis Pangilinan welcomed the Sandiganbayan’s decision finding Marcos guilty of “exploiting her position to steal the people’s money and betraying their trust.”

“The Sandiganbayan conviction is a faithful reminder that the Marcoses have plundered the nation’s wealth and have stolen from the people, no matter how much efforts to revise history are done by the Marcos family and their cohorts,” he said in a statement.

The judgment against Marcos was handed down more than 30 years after the charges against her were investigated, noted Sen. Panfilo Lacson.