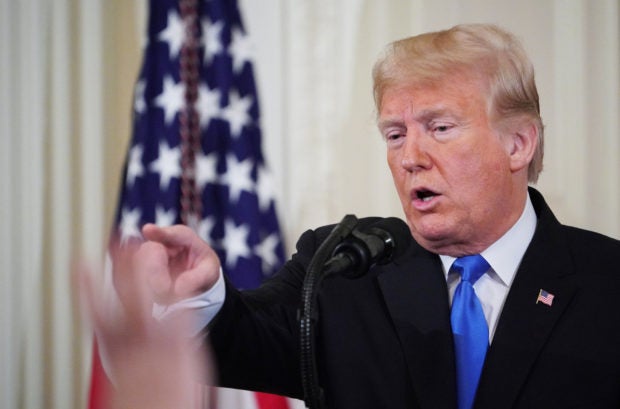 US President Donald Trump speaks during a post-election press conference in the East Room of the White House in Washington, DC, on November 7, 2018. AFP

WASHINGTON, United States – An upbeat President Donald Trump on Wednesday promised a post-elections era of “love” in Washington, saying he can work with opposition Democrats in a newly divided Congress, yet warning the gloves could come back off at any time.

In a first indication of how he confident he feels after Tuesday’s legislative polls, Trump fired his attorney general, immediately raising questions over the integrity of a bombshell probe into whether Russia colluded with his 2016 presidential election campaign.

But on the day after his Republicans lost the House of Representatives for the first time in eight years — while tightening their grip on the Senate — Trump focused his main message on unity.

“The election is over, everybody is in love,” he told a freewheeling press conference at the White House.

Trump cast the result as a victory, especially for himself, saying that his personal interventions in the midterm campaign had saved numerous Republicans from defeat, while those who “didn’t want the embrace” failed.

At the same time, he was eager to project a softer image after having been widely accused of going too far with attacks on “evil” political opponents and a never materializing “invasion” of illegal immigrants.

Trump said he “would love to have a very even, modest, boring tone.”

And he predicted that the Republicans’ loss of the House to the Democrats would actually encourage cooperation in Washington, rather than herald complete gridlock.

“I would love to see unity, peace, love, and any other word you want to use,” he said. “Obviously I think that we had to… wait until the midterms were over. Now they are.”

“It really could be a beautiful bipartisan type of situation.”

Trump’s peace overture to the same Democrats he has spent the last weeks vilifying came after the likely new speaker in the House of Representatives, Nancy Pelosi, also reached out.

“A Democratic Congress will work for solutions that bring us together, because we have all had enough of division,” said Pelosi.

Adding to the good vibes was Republican Senate majority leader Mitch McConnell, who painted the upper house as “a pretty collegial place.”

“Even though we had big differences over things like taxes and judges, there were plenty of other things we did together and no reason that would stop simply because the House now becomes Democratic,” he said.

Trump cited health care and infrastructure as areas where the two parties could work together.

But if the president held an olive branch in one hand, he had a club in the other.

Talk is growing that one of the Democrats’ first moves on taking control of the House at the start of 2019 will be to try to force access to Trump’s tax returns, which he has controversially refused to make public.

The powerful committees in the House could also bore down into murky allegations of collusion between Trump’s 2016 election campaign and Russia — a matter already subject to a huge independent investigation.

The sensitivity surrounding that scandal was highlighted yet again Wednesday when Trump fired Sessions.

And Trump made clear that if Democrats try their own inquiries, then peace and love will wither.

“I think that I am better at that game then they are actually,” he said.

As if any reminder was needed that Trump is generally more combative than cuddly, the press conference featured him in several angry exchanges with reporters.

According to Trump, “very hostile media coverage” is a constant problem and he lost his temper when CNN’s White House correspondent Jim Acosta asked if he had been “demonizing” immigrants in his midterm campaign rallies and also whether he was concerned by the Russia probe.

“You are a rude, terrible person,” he told Acosta in front of the world’s media.

“You shouldn’t be working for CNN,” he said. “When you report fake news, which CNN does a lot, you are the enemy of the people.”

Where Trump clearly was happier was in his increasingly bullish view of his reelection chances in 2020.

Republicans backed by the White House defeated Democratic senators in several states won by Trump in 2016 — Florida, Indiana, Missouri and North Dakota. Trump sees his influence on the Republicans’ performance Tuesday as a sign that his brand is rock solid.

Democrats gained seven governorships but fell short in a high-profile race in Florida, which — as Trump noted on Wednesday — is expected to play a key role in 2020.