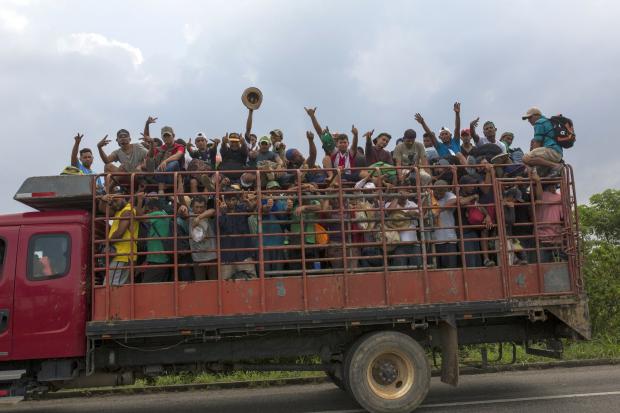 Central American migrants, part of the caravan hoping to reach the U.S. border, get a ride on a truck in Donaji, Oaxaca state, Mexico, Friday, Nov. 2, 2018. (Photo by RODRIGO ABD / AP)

WASHINGTON — President Donald Trump spread distorted theories and numbers on immigration in the campaign’s final days while claiming economic gains for minorities that have not been achieved.

Here’s a look at 11th hour rhetoric before the elections Tuesday and the reality:

TRUMP, on attracting the nonwhite vote from Democrats: “We have the best unemployment numbers, the best median income numbers for all of these groups. We have the best numbers we’ve ever had. …They should be worried about the African-Americans, because they’re going to lose them.” — Fox interview Monday.

THE FACTS: He did not achieve the best median income numbers for all the nonwhite groups. Both African-Americans and Asian-Americans had higher income prior to the Trump administration.

The median income last year for a black household was $40,258, according to the Census Bureau. That’s below a 2000 peak of $42,348 and also statistically no better than 2016, President Barack Obama’s last year in office.

Many economists view the continued economic growth since the middle of 2009, in Obama’s first term, as the primary explanation for recent hiring and income gains. More important, there are multiple signs that the racial wealth gap is now worsening even as unemployment rates have come down.
As to Asian-Americans, the median income for a typical household last year was $81,331. It was $83,182 in 2016.

TRUMP, on the practice of allowing immigrants caught crossing the border illegally to stay in U.S. communities as they await immigration hearings: “We’re not doing releases. What’s been happening over years is they would come in, release them, and they would never show up for their trial. And we now have 25 or 30 million people in this country illegally, because of what’s been happening over many years.” — remarks Wednesday to reporters.

THE FACTS: It’s nowhere close to 25 million to 30 million, nor has the number increased much in recent years.

The nonpartisan Pew Research Center estimates there were 11.3 million immigrants in the U.S. illegally in 2016, the most recent data available. That number is basically unchanged from 2009. Advocacy groups on both sides of the immigration issue have similar estimates.

The number of such immigrants had reached a height of 12.2 million in 2007, representing about 4 percent of the U.S. population, before declining due in part to a weakening U.S. economy.

TRUMP, on tweeting a video blaming Democrats allowing a man to enter the U.S. who killed two police officers: “All I’m doing is just telling the truth.” — speaking to reporters Friday.

THE FACTS: The video he spread around does not tell the truth. It says Democrats let Luis Bracamontes into the country and “let him stay.”

Bracamontes entered the U.S. illegally, in 1996, during the Democratic administration of President Bill Clinton, but he was also deported by that administration the next year after being caught buying crack cocaine and serving his sentence. He returned repeatedly. By the time he was sentenced to death in California for the 2014 killings of the police officers, he had been deported four times, according to Sacramento County Sheriff Scott Jones.

No evidence of leniency by Democrats has emerged in the episode. Democratic and Republican administrations alike have deported hundreds of thousands of people a year and no administration, Trump’s included, has caught everyone trying to enter illegally.

THE FACTS: A day earlier, he said of the migrants: “They want to throw rocks at our military, our military fights back. I told them, consider it a rifle.”
The procession has been largely peaceful. Some migrants in one caravan clashed with Mexican police at the Mexico-Guatemala border, hurling stones.

TRUMP: “President Obama separated the children from parents and nobody complained. When we continued the exact same law, the country went crazy.” — immigration speech Thursday.

THE FACTS: Actually, Obama did not do the same thing as a matter of policy.

While it’s true the underlying laws were the same, the Trump administration mandated anyone caught crossing the border illegally was to be criminally prosecuted.

That policy meant adults were taken to court for criminal proceedings, and their children were separated and sent into the care of the Health and Human Services Department, which is tasked with caring for unaccompanied migrant children.

Jeh Johnson, Obama’s Homeland Security secretary, recently told NPR there may have been unusual or emergency circumstances when children were taken from parents, but there was no such policy.

TRUMP: “At this very moment, large well-organized caravans of migrants are marching towards our southern border. Some people call it an invasion. …These are tough people in many cases; a lot of young men, strong men and a lot of men that maybe we don’t want in our country. …This isn’t an innocent group of people. It’s a large number of people that are tough. They have injured, they have attacked.” — immigration speech Thursday.

THE FACTS: He’s given no evidence that people in the caravans are, by and large, dangerous, hardened criminals — after acknowledging at one point that there is no such proof.

The migrants in the caravans are mostly from Honduras, where it started, as well as El Salvador and Guatemala. Overall, they are poor, carrying the belongings that fit into a knapsack and fleeing gang violence or poverty.

It might be true there are some criminals mixed in with the throngs, given the sheer number of migrants. Trump did not substantiate his claim that members of the MS-13 gang, in particular, are among them.

The Homeland Security Department issued a sheet stating that “over 270 individuals along the caravan route have criminal histories, including known gang membership.” But it did not specify how it had arrived at that number.

Some migrants in one of the caravans clashed with Mexican police at the Mexico-Guatemala border, hurling stones and other objects as they tried to cross the international bridge. One migrant died; it’s not clear how it happened.

Caravan leaders said they had expelled a number of troublemakers from the procession, exhibiting some self-policing. Ultimately, most entered Guatemala — and later, Mexico — by illegally bypassing immigration checkpoints.

The caravan otherwise has been overwhelmingly peaceful, receiving applause and donated food from residents of the towns they pass. Mexican police have not tried again to stop them.

TRUMP: “It was always told to me that you needed a constitutional amendment. Guess what? You don’t. … Well, you can definitely do it with an act of Congress. But now they’re saying I can do it just with an executive order.” — interview published Tuesday with “Axios on HBO.”

THE FACTS: Scholars widely pan the idea that Trump could unilaterally change the rules on who is a citizen. It’s highly questionable whether an act of Congress could do it, either, though it is conceivable that legislators could change the rules regarding children born in the U.S. of parents who are in the country illegally.

Peter Schuck is perhaps the most prominent advocate of the idea that birthright citizenship is not conveyed by the Constitution to children of parents who are living illegally in the U.S. Even he says “Trump clearly cannot act by” executive order.

“I feel confident that no competent lawyer would advise him otherwise,” he said by email Tuesday. “This is just pre-election politics and misrepresentation and should be sharply criticized as such.”

Schuck, of Yale, and colleague Rogers Smith of the University of Pennsylvania have argued since the mid-1980s that Congress can set the rules for providing citizenship to U.S.-born children of parents who came illegally.

But most scholars on the left and right share the view that it would take a constitutional amendment to deny automatic citizenship to children born in the U.S. to parents who are in the country illegally.

James Ho, a conservative Trump-appointed federal appeals court judge, wrote in the Green Bag legal journal in 2006 that birthright citizenship “is protected no less for children of undocumented persons than for descendants of Mayflower passengers.”

Stephen Yale-Loehr, a Cornell university immigration expert, said the case against Trump’s authority is “not open and shut, but the better view is it would require a constitutional amendment.”

The Supreme Court has never ruled squarely about the clause’s application to children of immigrants who are in the U.S. illegally. Trump did not make a distinction between legal and illegal status in his remarks.

An 1898 Supreme Court decision held that the U.S.-born son of legal Chinese immigrants was a citizen under the 14th Amendment; a footnote in a 1982 decision suggests there should be no difference for children of foreign-born parents whether they are in the U.S. legally or illegally.

TRUMP: “We’re the only country in the world where a person comes in, has a baby and the baby is essentially a citizen of the United States for 85 years with all of those benefits. It’s ridiculous. It’s ridiculous. And it has to end.” — interview with “Axios on HBO.”

The U.S. is among about 30 countries where birthright citizenship — the principle of jus soli or “right of the soil” — is applied, according to the World Atlas and other sources. Most are in the Americas. Canada and Mexico are among them.

Most other countries confer citizenship based on that of at least one parent — jus sanguinis, or “right of blood” — or have a modified form of birthright citizenship that may restrict automatic citizenship to children of parents who are on their territory legally.

More broadly, Trump’s view that U.S.-born children of foreigners live a lifetime of taking “all those benefits” ignores the taxes they pay, the work they do and their other contributions to society.

SARAH HUCKABEE SANDERS, White House press secretary: Trump “got elected by an overwhelming majority of 63 million Americans who came out and supported him and wanted to see his policies enacted.” — press briefing Monday.

THE FACTS: Trump did not earn a majority of votes in the 2016 election. He did win the Electoral College, allowing him to capture the presidency.

Trump won nearly 63 million votes compared with more than 65 million for Democrat Hillary Clinton, who racked up lopsided victories in big states such as New York and California, according to election data compiled by The Associated Press. But she lost the presidency due to Trump’s winning margin in the Electoral College, which came after he narrowly won less populous Midwestern states including Michigan and Wisconsin.

THE FACTS: Trump is making an unsubstantiated assertion. Republicans including Gillum’s opponent, Ron DeSantis, have made crime and corruption a talking point in the governor’s race to knock down the Tallahassee mayor’s political momentum, saying it’s a crime-ridden city.

Trump, who stressed the principle of innocent until proven guilty when allegations shadowed Supreme Court nominee Brett Kavanaugh, has also pointed to an ongoing investigation by the state’s ethics commission into whether Gillum accepted gifts from lobbyists after a Tallahassee businessman and persistent critic of Gillum filed a complaint.

Gillum has denied any wrongdoing in that case, or that he is a target in a separate ongoing FBI investigation into the city’s government. /atm