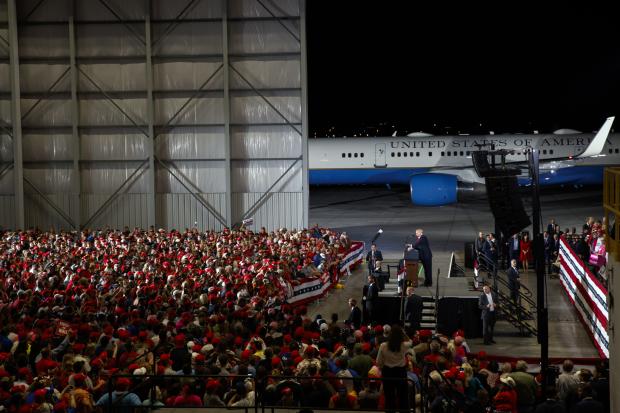 PENSACOLA, Florida — President Donald Trump on Saturday used his final Florida campaign event before next week’s elections to implore supporters to send Republicans to the governor’s mansion and the U.S. Senate, claiming that allowing Democrats to win either office would bring ruin to the state he also calls home.

Trump returned to Florida for the second time this week to help rally support for Gov. Rick Scott, who is challenging Democratic Sen. Bill Nelson. Trump also sought to boost former Rep. Ron DeSantis, who is facing off against Andrew Gillum, the Democratic mayor of Tallahassee, in the race for governor.

Trump argued that Gillum would “destroy Florida” and claimed that Gillum’s policies would be a “total nightmare” for the state.

“You have only one choice, Ron DeSantis for governor,” Trump told thousands of cheering supporters at a rally at Pensacola International Airport, with Air Force One park right outside of the hangar.

“If you want to pay high taxes, you ought to vote for the mayor of Tallahassee,” Trump said. “You will destroy the state that I love.” Trump noted that he also calls Florida home; his Mar-a-Lago estate is located in Palm Beach and he spends most weekends there in the winter.

He also said of the Democrat: “Andrew Gillum is not equipped to be your governor. It’s not for him.”

Trump criticized Nelson, too, claiming that he only sees the former astronaut “around election time when he’s on television every night.”

Earlier Saturday, Trump campaigned in Montana, where he made it clear that he wants to see Democrat Jon Tester booted from the Senate on Tuesday over a personal grudge as much as political ambition.

Trump blames Tester for the defeat of his nominee to run the Department of Veterans Affairs. The president told hundreds of cheering supporters at a separate airport rally in the Montana chill that Tester “tried to destroy” Ronny Jackson, a Navy admiral and White House doctor.

“That’s why I’m here,” Trump said. “I’ve never forgotten it and it’s honestly one of the reasons I’m here so much,” said Trump, who last campaigned in Montana in mid-October. “It’s a disgrace, what he did to that man.”

Trump was in Montana to boost GOP Senate candidate Matt Rosendale, who is challenging Tester in Tuesday’s election. The rallies are part of Trump’s multistate blitz in the run-up to Tuesday’s balloting, when control of the House and Senate — and perhaps the future of Trump’s agenda — are at stake.

Trump said having Rosendale in the Senate will be “phenomenal.”

The president blames Tester for the backlash against Jackson, who eventually withdrew his nomination after facing anonymous ethics allegations, including claims of on-the-job drunkenness and wrecking a government vehicle.

Tester, the top Democrat on the Senate committee that oversees veterans’ issues, had released a list of the allegations against Jackson that was compiled by the committee’s Democratic staff.

Trump, however, doesn’t mention that the allegations weren’t the only factor that contributed Jackson withdrawing from consideration. Lawmakers questioned Jackson’s limited managerial experience and his fitness to run a department as sprawling as the VA.

At both rallies, Trump sought to rally the energized crowds by talking up the economy and tax cuts, new Supreme Court Justice Brett Kavanaugh, border security and several caravans of Central American migrants who are slowly advancing toward the U.S.-Mexico border.

He mentioned plans for a new military branch called the Space Force, and complained anew about the news media.

Trump also defended his decision to focus almost exclusively on the migrants and immigration in the closing days of the election. He recently announced that he intends to change asylum procedures, end the constitutional guarantee of birthright citizenship and build numerous “tent cities” to hold migrants caught crossing the border illegally.

“You can only say so many times that we created 250,000 jobs last month,” Trump said in Montana, in defense of his focus on immigration that some of the president’s critics say amounts to fear-mongering. Trump has denied trying to instill fear as a reason to vote Republican on Election Day.

“When we’re fixing a problem or fixed a problem there’s no reason to go on about it for 45 minutes,” Trump said.

Trump also called up Rep. Greg Gianforte to speak from the podium but did not repeat his praise of the congressman, who was convicted of body slamming a journalist just before winning a 2017 special election. Trump had said during last month’s Montana stop that anyone who can do a body slam “is my kind of guy.”

The president subsequently was criticized for seeming to glorify violence against journalists. /atm