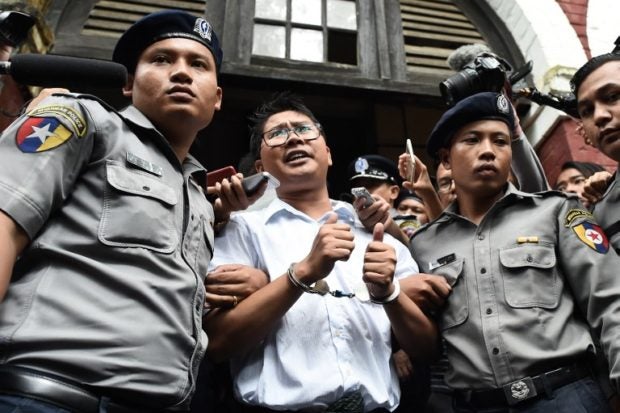 This file photo taken on September 3, 2018 shows Myanmar journalist Wa Lone (center) speaking to journalists while under police escort after being sentenced by a court to jail in Yangon.  AFP

YANGON, Myanmar — Two Myanmar Reuters journalists will file an appeal this week against a seven-year prison sentence linked to reporting on the Rohingya crisis, their defense lawyer said Monday.

Wa Lone, 32, and Kyaw Soe Oo, 28, were sentenced early September under a hardline state secrets act while investigating the massacre of 10 Rohingya Muslims during the military’s bloody crackdown last year.

Condemnation echoed around the world after what was widely regarded as a sham trial and an effort to silence media scrutiny of the army’s campaign against the Rohingya.

Defense lawyer Khin Maung Zaw told AFP that “everything is ready” for an appeal to be filed before the deadline on Saturday.

Myanmar’s civilian leader Aung San Suu Kyi refused to intervene during the trial even though her government had the power to drop the charges.

But Myanmar’s president— a Suu Kyi proxy — could now pardon the pair.

The appeal process should not affect the request for a presidential pardon, lawyer Khin Maung Zaw added.
However, the High Court is likely to take up to five or six months to rule on the appeal, leaving the reporters in jail.

“But in our country, nothing is certain. Anything can happen.”

If the High Court upholds the verdict, the reporters will appeal to the country’s Supreme Court in a process that would take at least another six months.

President Win Myint has issued pardons in the past and also intervened in the recent case of three reporters arrested over an article accusing the Yangon government of financial mismanagement.

But Win Myint has so far refrained from commenting on the Reuters case.

Pardoning Wa Lone and Kyaw Soe Oo could antagonise the still-mighty military and stoke resentment from a public that is largely apathetic — if not hostile — towards the duo’s plight.

Many in Myanmar regard the Rohingya as illegal immigrants and have little sympathy for their cause.

The military-led crackdown that started in August last year forced more than 720,000 Rohingya into sprawling camps in Bangladesh with refugees bringing horrific testimony of murder, rape and arson.

UN investigators are urging for the prosecution of Myanmar’s top generals for genocide, war crimes and crimes against humanity at the International Criminal Court (ICC).

Myanmar and its military vehemently reject the court’s jurisdiction over the country and deny nearly all allegations of wrongdoing.

They insist the campaign was a legitimate response to attacks by Rohingya militants. /ee