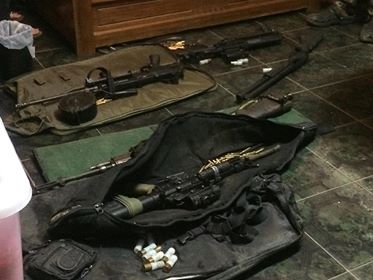 ILOILO CITY — Two scions of a political family in Sara town, Iloilo were killed early Wednesday when operatives conducted simultaneous raids on the 15 houses owned by the family and their allies in northern Iloilo.

Killed were former policeman Nerio “Ricky” Salcedo and his nephew Nixon Salcedo Jr., son and grandson of former mayor Neptali “Tali” Salcedo of Sara, about 100 kilometers north of this city.

Neptali, whose family lorded over Sara and nearby towns, was not around when policemen swooped down on his house in Barangay Poblacion Ilawod early in the morning on Wednesday.

His wife, incumbent Sara Mayor Ermilita Salcedo, was taken by the police but was released in the evening.

Sources closed to Neptali told the Inquirer that he had already sent surrender feelers to Iloilo police officials. The family is reportedly still studying their next move and declined to release a statement.

Chief Supt. John Bulalacao, police director for Western Visayas, said there is a possibility that  Neptali may have been tipped off about the police raid, which allowed him to evade the police operation.

Neptali uses a wheelchair as his leg was amputated a few years back because of an ailment.

Bulalacao said they purposely applied for the search warrants in Quezon City out of fear that the subjects might be tipped off.

At least 14 search warrants have been issued by Judge Angelyn Mary Quimpo-Sale of the Regional Trial Court-National Capital Region Branch 106 in Quezon City for possible violation of the Comprehensive Firearms and Ammunition Regulation Act.

At least 300 operatives from three police units conducted simultaneous raids on the 15 houses owned by Neptali and his family as well of his allies around 2 a.m. on Wednesday.

Police said Nerio and Nixon Jr. were killed after they allegedly put up a fight with the authorities.

Nerio died at the Sara District Hospital while Nixon Jr. died on the spot due to multiple gunshot wounds.

Aside from Neptali, other subjects of the search warrants who were not around during the raids were Nixon Sr., the young Nixon’s father; and Frank George “Jojo” Sanson.

A grenade, .45 pistol with assorted bullets, and a bulletproof vest were found in the elder Nixon’s house.

Operatives also found sachets of shabu  (chrystal meth), a digital weighing scale, .45 pistol, a holster, assorted ammunition, and an empty bullet shell of a caliber .45 pistol from the house of Sanson in Estancia town.

The police arrested Nestor Diboso Arante after the police found .45 caliber pistol, a black holster, and bullets from his house in Banate town.

The police claimed that Arante supplies firearms to armed groups in northern Iloilo.

Neptali’s brother, Noel, was also not around when the police raided his house, but they found one .45 caliber pistol, one magazine, five ammunition, 28 live ammunition of a 5.56 rifle, and one long magazine.

The police claimed that Noel, who has a pending murder case, leads a group involved in the theft of motorcycles.

The police also raided the homes of six allies of Neptali, but they failed to find any firearm, ammunition, explosives or drugs.

The subjects of the warrants were suspected to be involved in illegal drugs, gun-for-hire operations, the operation of private armed groups, murder cases in northern Iloilo as well as some robbery cases in President Roxas, Capiz province.

Bulalacao said they also applied for search warrants outside Panay to prevent any leakage.

“I don’t intend to offend the courts here, but we wanted to make sure that there would be no leak of the documents that we would present when applying for a search warrant,” he said.

Bulalacao, however, could not hide his disappointment that the subjects may have been tipped off  ahead of the operations as they feared since some raids yielded negative results.

He said they will investigate the possible leakage of the information. /ee