With a face-off between his daughter and son for the city’s top post inevitable, patriarch chooses to remain neutral
By: Dexter Cabalza - Reporter / @dexcabalzaINQ
Philippine Daily Inquirer / 05:03 AM October 16, 2018 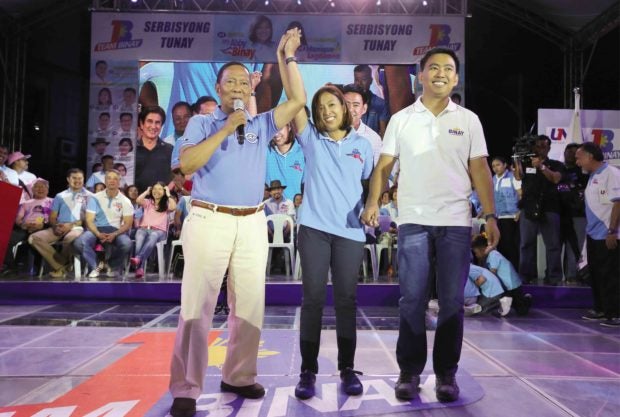 SIBLING RIVALRY With both of his children, Abby and Junjun, bent on running for Makati mayor, former Vice President Jejomar Binay could only offer his support and advice: Stick to issues and avoid hurtful words. —INQUIRER FILE PHOTO

Apparently recognizing the futility of persuading them to give way to each other, former Vice President Jejomar Binay has left it to the voters to decide who between his two children will end up mayor of Makati City in next year’s election.

“I will not decide who between the two of them is more deserving to become city mayor. This decision will be made by Makati citizens,” Binay said in a statement on Monday.

Incumbent Mayor Abby Binay, however, appears to have the advantage as she is the official candidate of her father’s political party, the United Nationalist Alliance (UNA).

Her brother, former city Mayor Junjun Binay, on the other hand, will be running under the newly formed local party, Una ang Makati (UAM).

According to their father, who himself occupied the city’s top post for many years, his children are of “the right age and can think for themselves.”

All that he could do now was to give them advice: “They should tell their leaders and supporters to act honorably and stay calm. Avoid hurtful words and make the campaign a positive and peaceful experience.”

Binay also urged his children to be “role models of honorable and clean elections,” saying the family will continue to serve and remain a family which “cannot be broken by mere politics” regardless of the poll outcome.

During a family meeting on Sunday—a day after Binay and wife, Elenita, returned from a pilgrimage to Italy—the family agreed that while campaigning, Abby and Junjun would discuss only their platforms and plans for Makati residents.

Abby Binay did not take part in the family meeting although her father told her to defer to the statement he would issue.

In a separate statement, Junjun Binay thanked his father for “respecting the voters of Makati” by not taking sides.

“We have both served as mayor of Makati, and its residents have seen our different leadership styles. I believe they have a basis for comparison and can decide who between the two of us can better serve the city and its people,” he said.

Abby Binay also issued a statement in which she said she was “deeply humbled by the trust given to me by my father.”

She added that “as his official candidate, I will continue to pursue his vision of a competent, compassionate and transparent leadership.”

“With my father by my side, I will continue to work tirelessly for our city and our people,” she said.

Binay himself will be running under UNA, seeking to represent the city’s first district in Congress.

In a previous interview, Abby Binay had discussed the possibility that she and her brother might end up running as independent candidates should they both be endorsed by their father and his party.

Under election rules, if a political party nominates more than one candidate for the same position, then all the nominations for that particular post “shall be denied by the Commission on Elections and they shall all be declared independent.”

The rivalry between the siblings was exposed last week after 13 out of the 18 incumbent city councilors, and 21 out of 33 barangay officials defected from Abby Binay’s camp and expressed their support for Junjun Binay.

They called the incumbent mayor “heartless” and “insensitive” to the plight of the city’s marginalized.

Abby Binay, however, dismissed their accusations, saying they were trying to get back at her after she ordered an investigation of all councilors allegedly involved in corrupt practices.

While she is gunning for a second term, her brother is eyeing a return to politics following his dismissal as Makati mayor by the Office of the Ombudsman in 2015 over allegations of overpricing.

His dismissal, however, was overturned by the Court of Appeals last May.