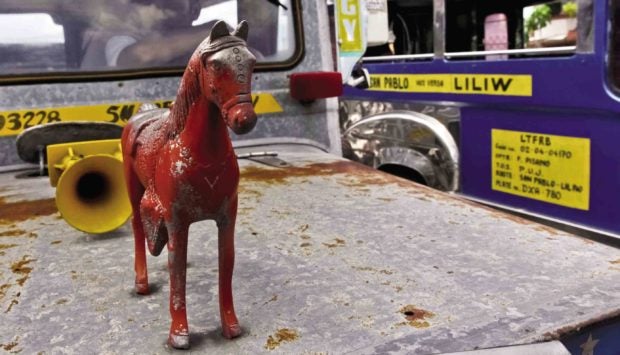 END OF THE ROAD The traditional jeepney will be out of Philippine roads as the government prepares to modernize public transportation. —CHRIS QUINTANA

SAN PEDRO CITY — Drivers of public utility jeepneys in Laguna province said commuters should expect higher fare as the government pushed through with its program to modernize public transportation.

Monday’s protest caravan in the province was part of the drivers’ “buildup” activity for a nationwide strike to prevent the looming phaseout of old jeepneys by next year, a leader of a transport group said.

“It seems there is nothing more the senators or our congressmen can do to stop it,” said Rolando Mingo, chair of the Southern Tagalog Region Transport Sector Organization, an affiliate of the Pinagkaisang Samahan ng mga Tsuper at Operator Nationwide (Piston).

The Land Transportation Franchising and Regulatory Board recently said the modernization would push through in March 2019 although it remained uncertain if the government would implement a total phaseout of old jeepneys using diesel.

According to Mingo, a traditional unit costs about P400,000, or more than half the price of a modern jeepney with Wi-Fi access and cameras, and with engines complying with the Euro 4 emission standards.

Mingo said the high cost of fuel and the shift to modern jeepneys would only result in higher fare rates.

“I really don’t think we can comply with the directive,” he said, despite the government’s offer of financial assistance to drivers.

About 10,000 jeepneys ply routes in Calabarzon (Cavite, Laguna, Batangas, Rizal, Quezon) region, with at least 3,000 of these servicing passengers in Laguna.

In Albay province, the provincial government on Monday announced the suspension of classes on Tuesday in anticipation of a transport strike in Bicol region.

Gov. Al Francis Bichara said classes in all levels in public and private schools in the province would be suspended after the Concerned Drivers and Operators (Condor-Piston) in Bicol announced a strike.

“We are doing this to call the attention of the government to do something in order to lower the prices of petroleum products in the country,” Rescovilla said. —WITH A REPORT FROM MICHAEL JAUCIAN