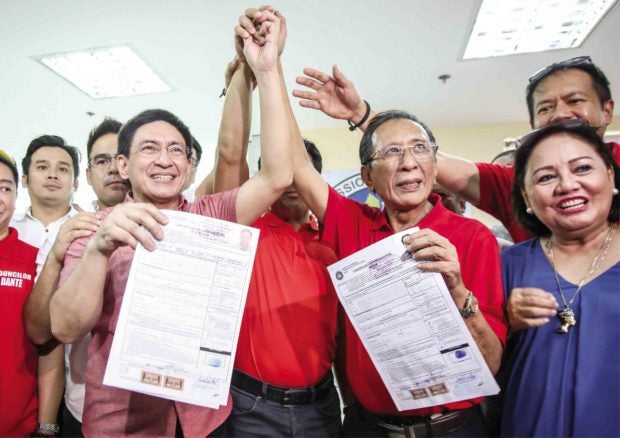 On Monday, Rep. Vincent “Bingbong” Crisologo officially filed his certificate of candidacy for next year’s mayoral contest in the Commission on Elections under the PDP-Laban party.

His running mate will be lawyer Joseph Peter Sison, a TV personality and former city councilor.

Their team will be pitted against incumbent Vice Mayor Joy Belmonte who is running with Councilor Gian Sotto and the tandem of former congressman Chuck Mathay III and Councilor Roderick Paulate.

Both Mathay and Paulate, on the other hand, are running under the Katipunan Demokratiko ng Pilipino party.

In an interview, Crisologo accused Belmonte and her supporters of pressuring some of his party mates into dropping their plans to run in next year’s elections.

He called on Belmonte to “level the playing field” for candidates like him with a “weaker political machinery.”

“There is a clamor for change in Quezon City. The people of Quezon City are being shortchanged. It’s about time that we return the city to its rightful owners: the public,” Crisologo said. “Let democracy work in Quezon City, not their money. They can’t buy our people.”

Crisologo, who is from the first district, was initially reported to be running with Rep. Winnie Castelo of the second district. Castelo is related to Sotto, whose father is Senate President Vicente Sotto III.

Crisologo is a three-term congressman and former city councilor. In October 2017, the Office of the Ombudsman found probable cause to charge him with graft and malversation over his alleged involvement in an P8-million pork barrel case.

He was mainly accused of funneling the funds through a Caloocan-based nongovernment organization.